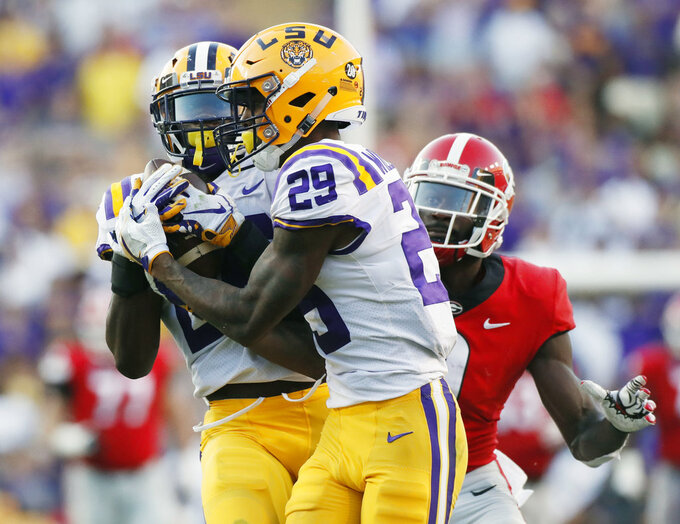 BATON ROUGE, La. (AP) — LSU's defense is getting mentally prepared for the physical challenges ahead of it.

Yes, the fifth-ranked Tigers were able to celebrate shutting down then-No. 2 Georgia. But now LSU will be tested by in its next two games by teams with quarterbacks who have dominated opponents with different strengths.

On Saturday, The Tigers will be challenged by Mississippi State's Nick Fitzgerald, who is the Southeastern Conference quarterback career-rushing leader.

Following an off week, the Tigers will then attempt to stop Tua Tagovailoa and top-ranked Alabama on Nov. 3. Tagovailoa, who has yet to play a complete game this season, has passed for 1,760 yards and 21 touchdowns — and no interceptions.

Right now though, LSU's focus is not on the Crimson Tide; Mississippi State is receiving all of the Tigers' attention.

And with good reason: Last season, the Bulldogs hammered LSU 37-7 in Starkville.

"We still have that taste in our mouth from last year," said LSU coach Ed Orgeron, referring to the defeat against Mississippi State. "They out-physicaled us on both sides of the football."

The Tigers were reminded two weeks ago what can happen when they lose at the line of scrimmage. Florida rushed for 215 yards in handing LSU its only defeat of the season, 27-19. The Tigers turned the tables on Georgia, holding Bulldogs to 113 yards on the ground in a dominating 36-16 victory.

"I would not say we were embarrassed against Florida," defensive end Breiden Fehoko said. "It was that we were disappointed in the way we played. We know what we are capable of doing. Last week against Florida, we got beat in the trenches. Florida won the game on both sides of the ball.

"We didn't lock in against Florida and they hit us in the mouth. Against Georgia, we wanted to show the whole nation what we can do. We dominated on all points of the defense. That game showed the guts of this team."

After two ineffective offensive games against Kentucky and Florida, Mississippi State let Fitzgerald do what he does best in a 23-9 victory against Auburn. Fitzgerald carried the ball 28 times for 195 yards and two touchdowns. Running back Kylin Hill added 126 yards on the ground.

"Nick Fitzgerald is one of the best quarterbacks in the country," Orgeron said. "He is a very dangerous runner. He can pick and choose his holes. Fitzgerald runs between the tackles and he can make you miss. Mississippi State switched up its offense and ran for 349 yards against Auburn."

Losing games by 30 points is a rare occurrence for LSU. The 30-point setback to Mississippi State was only the fifth such defeat for the Tigers since the start of the 2000 season. "The Mississippi State game was our first loss of the season last year," said Fehoko, who was ineligible in 2017 after transferring from Texas Tech. "That game took everybody by shock. There was a players-led meeting after they got back in town.