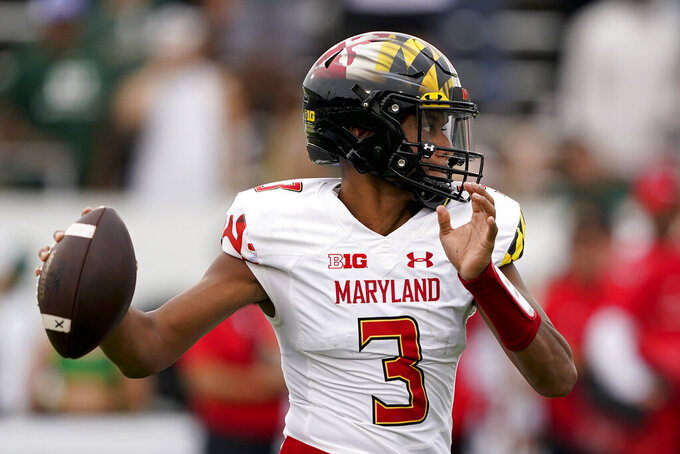 Maryland quarterback Taulia Tagovailoa passes against Charlotte during the first half of an NCAA college football game on Saturday, Sept. 10, 2022, in Charlotte, N.C. (AP Photo/Chris Carlson)

Line: Maryland by 2 1/2, according to FanDuel Sportsbook.

This figures to be the toughest test so far for both teams after each opened with two lopsided victories. It's the type of game Maryland should win at home if the Terrapins are making the type of progress they want, but it probably won't be easy against an SMU team that has started 5-0 in each of the past three years and reached No. 19 in the AP Top 25 last season.

Maryland QB Taulia Tagovailoa vs. SMU QB Tanner Mordecai. They don't oppose each other directly, but the two quarterbacks are the story of this game. Tagovailoa had a fine season in 2021, and he threw for 371 yards and four touchdowns last weekend at Charlotte. Mordecai's big game came in his team's opener against North Texas: 432 yards and four TDs.

SMU is 27-10 since the start of the 2019 season, the most wins by an FBS team in Texas. ... Tagovailoa's brother Tua is in the area this weekend when his Miami Dolphins play at Baltimore on Sunday. ... SMU has won 14 straight regular-season nonconference games. ... Tagovailoa went 27 of 31 last weekend, a school-record 87% completion rate.