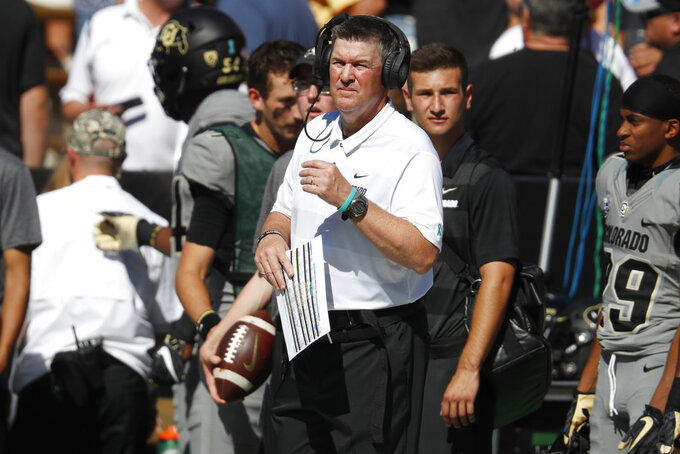 Steven Montez was 14 of 19 for 166 yards passing and another score to help the Buffaloes (3-0) win their home opener. The Buffaloes have won their first three games for the second straight season.

McMillian had touchdown runs of 1 and 75 yards as Colorado built a big lead over the FCS Wildcats. His long touchdown run came on the first snap of the third quarter and made it 35-0.

"(The line) gave me a crease so once I hit it I got into the open field and wasn't trying to get caught," McMillian said.

The Buffaloes built a 28-0 lead in the first half on Montez's 28-yard scoring pass to Laviska Shenault Jr., touchdown runs by McMillian and Kyle Evans and a 14-yard fumble recovery and return by linebacker Davion Taylor.

Another drive ended when New Hampshire safety Evan Horn intercepted Montez in the end zone late in the second quarter.

"It was a hell of a play by Pop," Wildcats coach Sean McDonnell said. "A nice play by Evan Horn, but the disappointing thing is that we didn't tackle. We didn't tackle the way we did in the Colgate game, I think I'd feel a little better about it. That being said, it was a little bit different cat that we were chasing this weekend."

The Wildcats have lost their first three games since starting the 2002 season 0-4.

New Hampshire: The Wildcats have missed senior quarterback Trevor Knight, who was injured in the season-opening loss at Maine. Lupoli is just 32 of 68 for 391 yards and one touchdown since taking over for Knight. The 14 points scored Saturday doubled New Hampshire's season total, but the Wildcats' scoring came after the game was all but decided.

Colorado: The Buffaloes showed no signs of a letdown after their big win at Nebraska last week. The defense held the Wildcats to 42 rushing yards, sacked Lupoli five times and forced three turnovers. Colorado rushed for 311 yards after being held to 44 yards on 35 carries against the Huskers. The Buffaloes finished with 491 total yards.

New Hampshire has a bye week before playing at Elon on Sept. 29.

Colorado has a week off before it hosts UCLA in its Pac-12 opener on Sept. 28.