MIAC ousts original member St. Thomas for being too strong 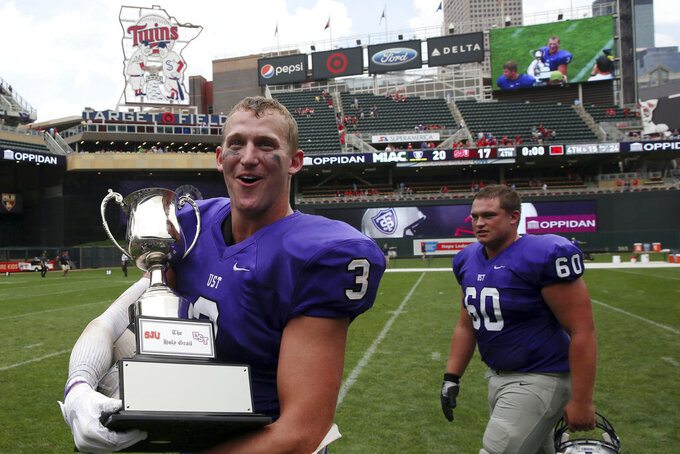 FILE - In this Sept. 23, 2017, file photo, St. Thomas wide receiver Tanner Vik walks on the field with the Holy Grail trophy after the team's win over St. John's in an NCAA college football game, in Minneapolis. The Minnesota Intercollegiate Athletic Conference has decided to oust the NCAA Division III league's largest school, St. Thomas, for competitive purposes. The MIAC announced Wednesday, May 22, 2019, the Tommies will be "involuntarily removed" in two years by the conference they helped found in 1920. (Anthony Souffle/Star Tribune via AP, File)

The Minnesota Intercollegiate Athletic Conference has decided to oust St. Thomas, the largest school in the NCAA Division III league and the most successful in recent years in sports.

The MIAC announced Wednesday the Tommies will be "involuntarily removed" in two years by the conference they helped found with six other schools in 1920.

The conference presidents, who met about the issue last month without taking action, cited athletic parity as their primary concern. The private Catholic liberal arts university has about 6,200 undergraduates, double the enrollment of the next-closest schools in the league.

The Tommies have won 12 consecutive MIAC all-sports trophies on both the men's and women's side, based on conference finish in each event.

St. Thomas will remain eligible for full-fledged membership through the end of the 2020-21 school year, unless it is able to secure a new home first. The league, in a statement released Wednesday , said the Tommies would leave "in good standing with a long and appreciated history of academic and athletic success."

The Minneapolis Star Tribune reported last month that rival MIAC presidents sought to expel St. Thomas with amended league bylaws to enact an enrollment cap. St. Olaf, which lost to St. Thomas 97-0 in football in 2017, was the only institution to publicly acknowledge the process after the newspaper brought it to light.

"We are participating in those discussions in good faith," the school said last month. Of the 13 institutions currently in the league, St. Thomas is one of four in the state's capital city, St. Paul.

So what happens to St. Thomas sports now?

Athletic director Phil Esten has said the Tommies were committed to maintaining a non-scholarship Division III program, but they'll never find a better fit than the league they must leave. Six of the schools are in the Twin Cities metro area, and five more are less than a 90-minute drive away including chief rival St. John's University.

Only two foes, Concordia College in Moorhead near the North Dakota state line and St. Mary's University in Winona not far from Wisconsin, are more than 100 miles from St. Thomas. St. Mary's is the only one of the 11 schools that enroll males — the College of St. Benedict in St. Joseph and St. Catherine University in St. Paul are the all-female institutions — and doesn't play football. Macalester College pulled its football team out nearly two decades ago for a lower-tier Division III league.

There is hardly a small-school conference with a richer history than the MIAC, highlighted by the St. John's-St. Thomas football rivalry that dates to 1901.

The Johnnies and Tommies played in 2017 at Target Field, the home of the Minnesota Twins, in front of a Division III record 37,355 fans. St. John's won the league last season and, with four national championships and 33 MIAC titles, has historically been far more dominant in the sport than St. Thomas, which surged to the top a decade ago with the arrival of head coach Glenn Caruso.

"We believe our strong presence and success in the conference has made it a better and more competitive one," Sullivan wrote. "This history holds importance to our entire community, including our students, coaches and alumni. St. Thomas expended tremendous effort to remain in the MIAC and stabilize the conference."

The Tommies could try to join another Division III league, with the next-best option likely the Wisconsin Intercollegiate Athletic Conference, which has eight full-time members, all public schools larger than St. Thomas. Road trips would range from 1½ to 4½ hours.

Moving up a level or two would be a far more costly and complicated process.

The Northern Sun Intercollegiate Conference would be an easy geographic fit in Division II, with most members in Minnesota, but the Tommies would have to add athletic scholarships to keep up in a league where heavyweights Minnesota State and St. Cloud State have more than double the enrollment.

To eventually settle in Division I, where a smattering of FCS schools play non-scholarship football, St. Thomas would need to find a league home over what would be at least a 12-year reclassification process with a mandated stop in Division II per NCAA rules.