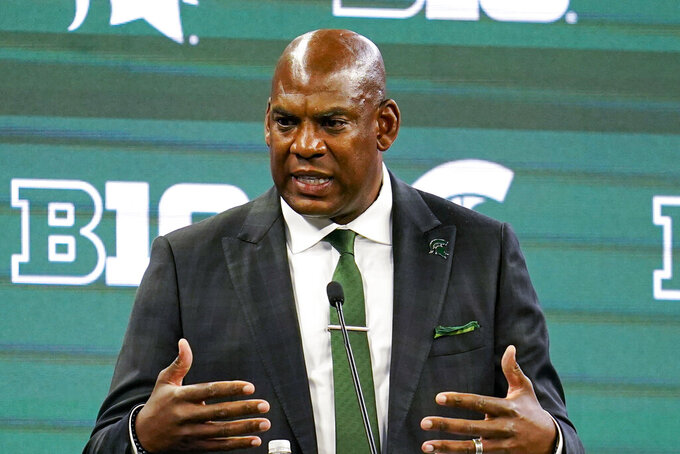 FILE - In this July 23, 2021, file photo, Michigan State head coach Mel Tucker talks to reporters during an NCAA college football news conference at the Big Ten Conference media days, at Lucas Oil Stadium in Indianapolis. Tucker is entering his second season at Michigan State, but it seems as if he is starting over with an influx of transfers such as former Temple quarterback Anthony Russo. (AP Photo/Michael Conroy, File)

Tucker had no interest in helping the Wildcats prepare for the season-opening game.

“I don’t like to tell our opponents who we're playing or who they should expect to see," he said this week. “It makes sense, doesn’t it?"

Tucker's choices under center are former Temple quarterback Anthony Russo, one of 20 transfers on the reshaped team, and redshirt sophomore Payton Thorne.

“The guys competed and the competition was good for our team," Tucker said. “I commend them both for the way they competed. We have two really good players that we feel good about."

Russo has 31 games of experience, including 26 starts, over three seasons with the Owls. The 6-foot-4, 240-pound pocket passer has 44 career passing touchdowns and 32 interceptions.

The 6-2, 210-pound Thorne can make plays and buy extra time with his feet. He also has the benefit of playing in four games, starting one, last year. Thorne was 48 of 85 for 582 yards with as many touchdowns (three) as interceptions (three) in Tucker's first season.

“We can adjust to either quarterback," receiver Jalen Nailor said. “It’s been a great competition all fall camp."

Tucker and his players mentioned more than once that they have been waiting eight months to get back on the field. They're looking forward to making memories with a new-look team after enduring a pandemic-altered season with a 2-5 record.

Despite the miserable mark, Tucker and his team pulled off two upsets against ranked teams: No. 11 Northwestern and No. 13 Michigan. Those accomplishments, though, have not been mentioned by Tucker to boost his players' confidence coming off a shaky season.

“The past is not necessarily predictive of the future," he said.

Tucker has not and will not make excuses for a tough transition from Colorado to Michigan State, but the timing of his arrival was less than ideal for him, the Spartans and the Buffaloes.

Tucker was hired away from Colorado, where he was 5-7 in his only season two years ago, and shortly thereafter the pandemic sent his new players home. When the Spartans returned, bonds were developed with their new coach and gains were made in the weight room.

“We know our players a lot better now," Tucker acknowledged. “And, I feel like we’re more prepared."

And as the Wildcats get ready to host Michigan State, they will be left to guess which quarterback they will face when the games begin.

“There’s going be so many unknowns for both teams," Tucker said. “You don’t want do anything to give the opponent any type of advantage. And, you don’t want to put your team at a disadvantage by the information that you that you communicate and that you put out there."