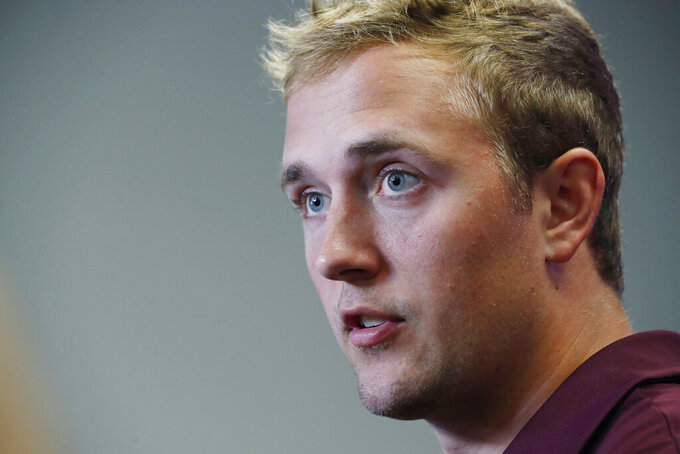 FILE - In this Aug. 10, 2019, file photo, Mississippi State quarterback Tommy Stevens answers a reporter's question during media day in Starkville, Miss. Stevens and coach Joe Moorhead previously worked together at Penn State, where Stevens was a backup quarterback and Moorhead was offensive coordinator. They’re counting on that shared background to benefit them as Stevens prepares to make his first career start this week as a graduate transfer Saturday when Mississippi State faces Louisiana-Lafayette in New Orleans. (AP Photo/Rogelio V. Solis, File)

Stevens was a backup quarterback at Penn State, and Moorhead was the Nittany Lions' offensive coordinator before taking over as the Bulldogs' head coach last season. Stevens, a graduate transfer, will make his first career start Saturday when Mississippi State opens the season by facing Louisiana-Lafayette in New Orleans.

Moorhead says he's seen plenty of changes in Stevens since they last worked together in 2017.

"I've seen a lot more maturity and a lot more understanding," Moorhead said. "Early on in Tommy's career, he is so incredibly athletic and gifted physically as a runner and a thrower (that) he would fall back on those things and maybe not be as precise in the detail.

"What I've seen throughout camp and heading into practice week is a maturation and an understanding of the details, where maybe in the past he would not change the protection, thinking he can get the ball out or not go through his reads. He's doing a much better job understanding the scheme and how it affects his decision-making and production."

But all that came up in a backup role. Now, Stevens finally gets the chance to start.

"Obviously it's there to think about," Stevens said. "But as far as things that I'm doing, I haven't changed anything. I take a lot of pride in the way I prepared for things at Penn State. Although I'd never been given the opportunity to start a game there, I took the same approach every week.

"From the first game there that I prepared as a backup to now, things have changed a little bit and taking things from here and there to make it part of my regular routine for the week. But every week, I try to prepare as the starter."

One area that has never caused Moorhead concern is Stevens' ability to throw the football.

"His passing has never been an issue," Moorhead said. "He's always been a guy that could throw the ball well, very accurately. I think what you're seeing now is his increase of understanding of the scheme and where to go with the ball and why."

Stevens arrived at Mississippi State in early June and spent the next two months getting to know his teammates. That process continued in training camp as he steadily built the trust of his coaches and teammates.

That was evident earlier this week when Stevens was voted as one of the team's captains by his teammates.

"Once the people got to know him on a personal level, they see he's a really laid-back guy," Moorhead said. "For the team to think that much of him to vote him a captain and he's only been here the summer, it speaks a lot for him and for his teammates and how they believe in him."

Stevens considers it a major honor.

"It was awesome," said Stevens. "Big goal of mine really since I started playing college football and it is a huge honor. I'm very proud to be a captain and very thankful of my teammates for thinking so highly of me. I am very proud of that accomplishment and it is a credit to my teammates being able to have faith in someone that is new around here."