Missouri grinds out 1st victory over Kentucky in five years 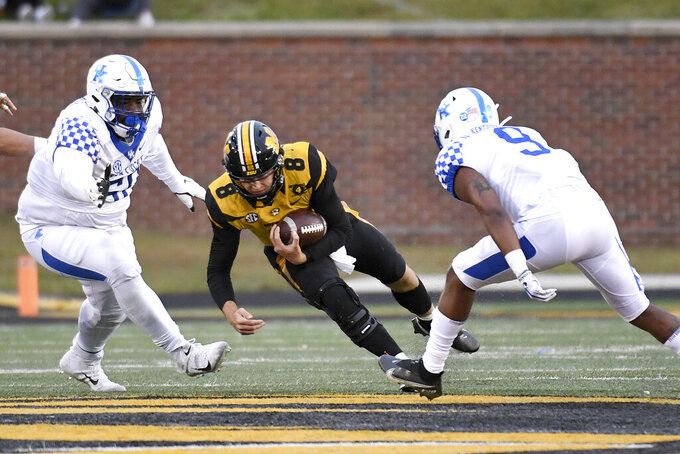 COLUMBIA, Mo. (AP) — Missouri kept handing the ball to Larry Rountree, and Kentucky barely got a chance to take a turn. Rountree carried 37 times for 126 yards and two touchdowns as the Tigers dominated the clock and the Wildcats in a 20-10 victory on Saturday.

Missouri (2-2 Southeastern Conference) held the ball for more than 43 minutes and ran 92 plays while holding Kentucky (2-3) to just 36 plays.

“Both sides of the ball, they played the game exactly the way we wanted to be able to win, and that doesn’t happen very often against a really good team,” Missouri coach Eli Drinkwitz said. “I’m shocked by these stats. I’ve never been in a game like that.”

Rountree said Drinkwitz told him on Friday night the plan was to pound the ball all day. Rountree was happy to oblige, and he felt no worse for wear after a busy day.

In the second half, Missouri wore down Kentucky with a 21-play drive that lasted 9:35 — although it produced no points — and a 16-play drive that ate up 7:35 and resulted in a short Harrison Mevis field goal that put the game out of reach.

“We were getting pushed around from the beginning of the game,” Kentucky coach Mark Stoops said.

Stoops shuffled quarterbacks Terry Wilson and Joey Gatewood, but neither could sustain drives and stay on the field. Wilson hit Josh Ali for a 26-yard touchdown pass early in the fourth quarter to cut Missouri’s lead to 17-10, but that was the sole offensive highlight on a day when Kentucky gained just 145 total yards. Christopher Rodriguez rushed nine times for 48 yards, but there weren’t many opportunities, because Rountree and the Tigers had the ball most of the day.

“He’s a workhorse,” Missouri linebacker Nick Bolton said of Rountree. “It’s a blessing to have him on the football team.”

Missouri: After opening the season with two blowout losses, the Tigers have won two in a row as underdogs to inject new life into their season under first-year coach Drinkwitz. Missouri ended a five-year losing streak against Kentucky.

Kentucky: Stoops pulled senior quarterback Wilson after three unproductive drives in the first quarter and replaced him with Gatewood. Stoops went back to Wilson in the second half, before shifting to Gatewood for the final possession. Neither player had much success. Wilson completed 3 of 9 passes for 35 yards, and Gatewood was 1 of 4 for 12 yards.

Asked about his plan for the position next week, Stoops said, “Not sure.”

Missouri freshman quarterback Connor Bazelak was named the Davey O’Brien National Quarterback of the Week after torching LSU for 406 passing yards and four touchdowns in his last outing. Against Kentucky, big plays were rarely available, but Bazelak efficiently completed 21 of 30 passes for 201 yards.

He helped Missouri convert 10 of 20 third downs and 4 of 5 fourth downs, often by just enough yardage to get a first down.

“Our biggest coaching point with him was: ‘Don’t get bored doing your job. Don’t get bored taking the checkdown and throwing the ball underneath,’ ” Drinkwitz said.

Three weeks ago, the Missouri defense was pushed around by Tennessee, giving up 232 rushing yards in a blowout loss. Since then, the Tigers have shown a nasty streak, finishing an upset win over LSU with a four-play goal-line stand and then suffocating Kentucky on Saturday.

“Any time you can make an offense one-dimensional, it’s going to be good for the defense,” said Bolton, who had seven tackles and a sack. “Kentucky likes to run the ball. They’re physical up front. They did a hell of a job trying to put us in conflict when they could, but our D-line and linebackers won their one-on-one matchups and put them in position where they had to pass the ball at the end of the game.”

Missouri: The Tigers will visit 10th-ranked Florida on Oct. 31.

Kentucky: The Wildcats will face their toughest test to date when No. 4 Georgia visits on Oct. 31.