Missouri makes 1st visit to Auburn in SEC opener for both 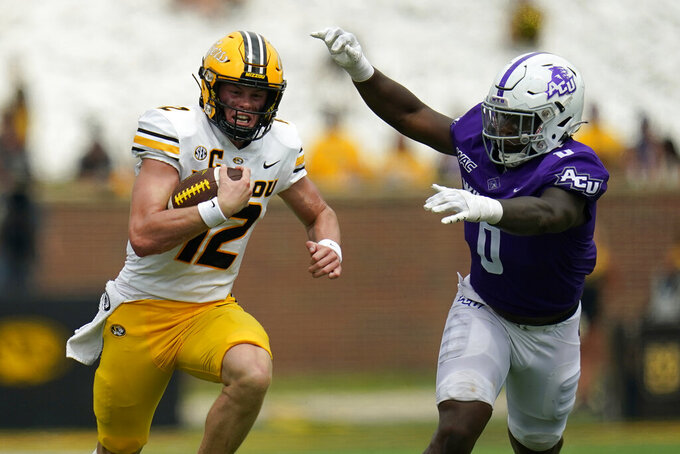 Line: Auburn by 7 1/2, according to FanDuel Sportsbook.

Auburn and coach Bryan Harsin are trying to keep the season from going off the rails after a 41-12 loss to No. 14 Penn State. Auburn has scored just 18 points in the last six quarters and dropped five straight against Power Five teams. Missouri had to rebound from a nearly identical margin of defeat (40-12) to Kansas State. But Abilene Christian didn't provide much of a challenge.

Which passing game will break through? Auburn's two-quarterback rotation has led to the 87th-rated passing offense, producing just 225.3 yards a game and two touchdowns total. Missouri's Brady Cook had career-highs with 297 yards and three touchdowns, albeit against Abilene Christian. Missouri still ranks 94th with an average of 218.3 passing yards.

Missouri: Super recruit WR Luther Burden III is the program's seventh player to record touchdowns via rushing, receiving and punt return in the same season. He scored on a 78-yard punt return against Abilene Christian.

Auburn: QB TBA. Harsin has refused to say if he'll make a quarterback change or discuss the health status of T.J. Finley, who appeared to suffer an injury to his non-throwing shoulder against Penn State. But neither Finley nor backup Robby Ashford has been consistent. Finley has been intercepted four times and Ashford twice in three games. They've each thrown one touchdown pass. Former Texas A&M starter Zach Calzada hasn't played.

With Missouri's first visit to Jordan-Hare Stadium, every current team will have played at Auburn. Auburn won 51-14 in Columbia in 2017. ... Auburn is 24-5 over its last 29 SEC openers. ... Several Missouri staffers have ties to Auburn and/or Harsin, including head coach Eliah Drinkwitz. Drinkwitz worked under the Auburn coach at Arkansas State and Boise State. He also worked at Auburn in 2010-11. ... Missouri's Dominic Lovett got his first two career receiving touchdowns against Abilene Christian, including a 79-yarder that was the team's longest play from scrimmage since the 2018 Liberty Bowl.