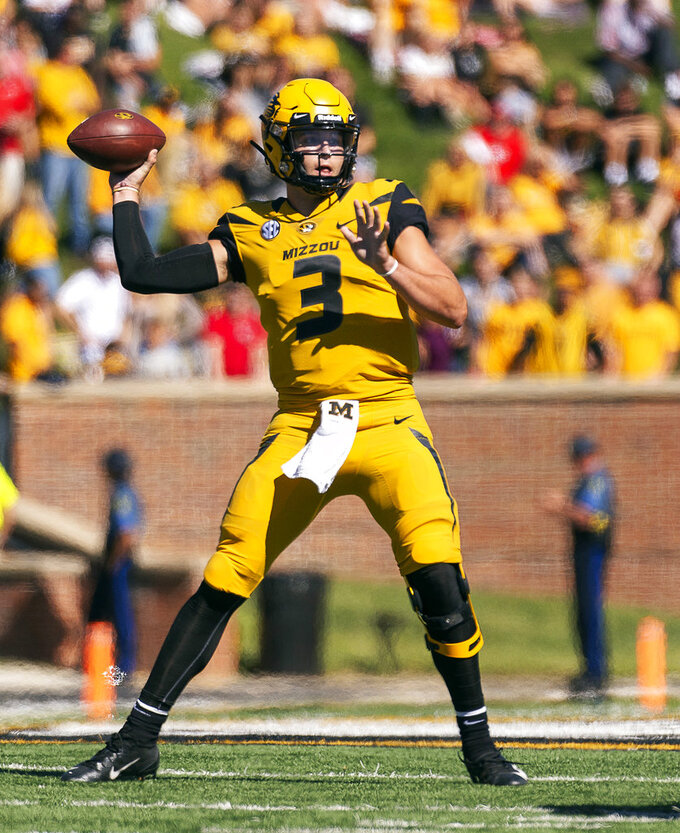 FILE - In this Saturday, Sept. 22, 2018, file photo, Missouri quarterback Drew Lock throws a pass during the first half of an NCAA college football game against Georgia in Columbia, Mo. The bye week came at a good time for Lock and Missouri, which hung with Georgia before mistakes wound up biting them. Missouri committed three turnovers and had a punt blocked that resulted in a touchdown. (AP Photo/L.G. Patterson)

COLUMBIA, S.C. (AP) — Both Missouri and South Carolina feature quarterbacks who've drawn the interest of NFL scouts. Only one so far is living up that billing, though.

The Tigers' Drew Lock leads the Southeastern Conference at more than 320 yards passing and is second in the league with 11 touchdown passes. He'll try and keep that going when he faces South Carolina (2-2, 1-2 SEC) on Saturday.

Lock, the 6-foot-4, 225-pound senior, has a strong arm and is nimble enough that he's projected as a first-round NFL pick. Right now, he's only concerned with helping the Tigers (3-1, 0-1) compete in the SEC and not slip further behind undefeated SEC Eastern Division rivals in No. 2 Georgia and No. 13 Kentucky.

That means not getting caught up in South Carolina's struggles so far this season.

Lock expects the Gamecocks to make things difficult for Missouri's passing attack, ranked No. 1 in the league.

"Really good teams find ways to get out of your game and you have to adjust," Lock said.

Missouri has many offensive threats, Lock continued, where if the Gamecocks take something away, the Tigers can find other successful options.

"We are very versatile," he said.

Gamecocks quarterback Jake Bentley simply hopes to improve his sagging game. The South Carolina junior was also considered a high draftable pick with a strong showing this season. Instead, Bentley and the Gamecocks have struggled.

He's thrown for 232 yards a game with seven TDs and six interceptions, an SEC high among starting quarterbacks. Bentley left a 24-10 loss at Kentucky early last week with a knee injury. While Bentley's practiced, Gamecocks coach Will Muschamp has been slow to guarantee that his starting quarterback will be on the field come Saturday.

Bentley did not play well when he was in against the Wildcats , finishing three interceptions and 148 yards passing — just nine before halftime.

"We didn't throw and catch it very well against Kentucky, we'll call it like it is," Muschamp said. But "it wasn't all on (Bentley), you know. At the end of the day, our football team, our players, myself, have 110 percent confidence in Jake and how he'll perform Saturday."

Some other things to watch for when Missouri plays South Carolina:

Nobody wins just one in the short history between Missouri and South Carolina. The teams have traded off runs of two straight victories in the eight games in the series. Missouri got it started before joining the SEC with bowl wins in 1979 and 2005. South Carolina won the first two times as SEC rivals, then Missouri two with the Gamecocks taking the last two.

Gamecocks receiver Deebo Samuel almost single-handedly defeated Missouri last year in a 31-13 South Carolina win. With the Tigers up 10-0, Samuel broke off a 97-yard kickoff return, then added a 25-yard TD run the next time the Gamecocks got the ball to put his team ahead for good.

"He can change the dynamics of the game," Missouri coach Barry Odom said.

South Carolina coach Will Muschamp hates to lose and is known for his fire at times on the sidelines. But the Gamecocks say the third-year coach has done a good job balancing the disappointment with the need to put the losses behind and move forward. Gamecocks guard Zack Bailey said Muschamp's both gotten loud and been encouraging. "No one likes to lose," he said.

South Carolina's Will Muschamp and Missouri offensive coordinator Derek Dooley have shared the same sideline in college and the NFL. Once more, the two friends will face off against each other. The two were part of Nick Saban's staff at LSU and with the Miami Dolphins. They also matched up when Muschamp coached Florida and Dooley Tennessee.

"Will's a good friend of mine," Dooley said this week.

The teams, both located in cities named Columbia, compete each year for the Mayor's Cup. The trophy was created in 2012 when Missouri became a regular SEC East rival of the Gamecocks. South Carolina has had the cup in its trophy case the past two years.