Mullen gets what he asked for, sort of, after breaking mark 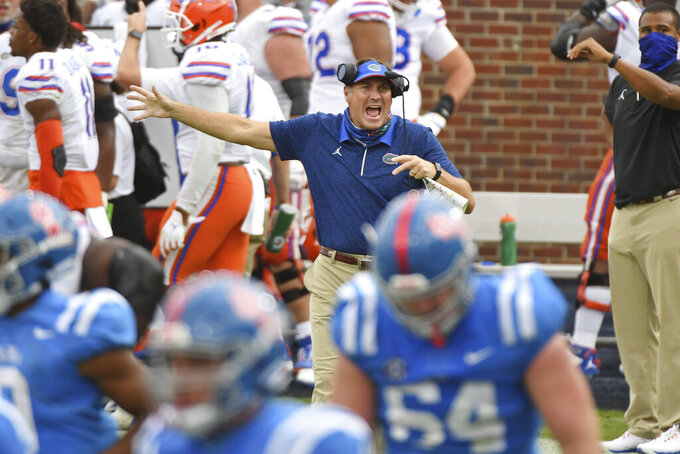 Spurrier delivered a bottle of wine to Mullen in the football office, making good on Mullen’s suggestion that Spurrier owed him something special after setting a new school record for most yards in Southeastern Conference play.

The Gators finished with 642 yards in a 51-35 victory at Ole Miss. They broke the previous mark of 640 set Sept. 29, 2001, against Mississippi State. That came in Spurrier’s final season in Gainesville.

Mullen said after the game that his neighbor Spurrier “should have a really nice bottle of wine sitting on my desk.”

Spurrier might have missed part of that. The notoriously frugal coach showed up with a Sutter Home mini bottle of sauvignon blanc, which retails for $1.75 on the winemaker’s website.

“It is actually a bottle and it is wine,” Mullen quipped.

Spurrier told Mullen he would buy him two bottles of wine if he wins the SEC championship. The Gators host one of Spurrier’s former teams, South Carolina, on Saturday.

“I love having Coach Spurrier around to have a football person like that around the building and around all the time,” Mullen said. “I mean, I grew up a huge fan of him. Very rarely does he not walk in the room and put a smile of the face of everyone in the office.”