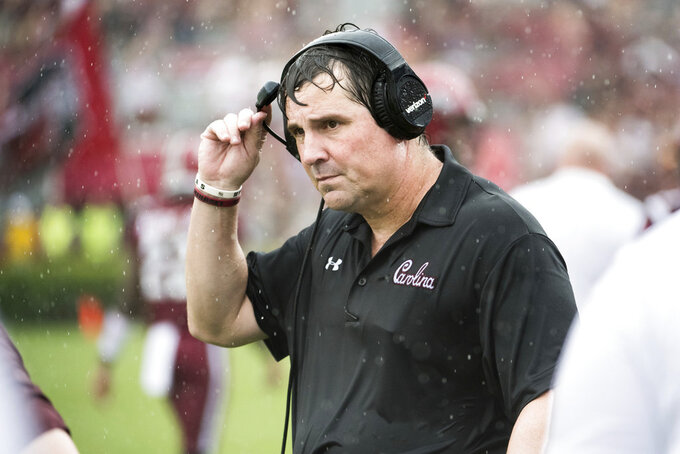 COLUMBIA, S.C. (AP) — South Carolina got some good news about its quarterback situation with Jake Bentley expected to return as the Gamcocks' starter against No. 22 Texas A&M after missing last week with a left knee injury.

Coach Will Muschamp said Tuesday that Bentley has moved well, looked strong and, unless there's a setback, will play Saturday.

Without Bentley, some good things happened for South Carolina (3-2, 2-2 Southeastern) last week. Not only did the Gamecocks come away with a win, they backup Michael Scarnecchia led the team to a 37-35 victory over Missouri and demonstrated South Carolina has depth at the positon.

Bentley said his knee feels fine expects to return against the Aggies (4-2, 2-1).

"As long as I'm ready to go, that's the plan," Bentley said.

Bentley left South Carolina's loss at Kentucky in the second half after hurting his left knee. He practiced much of last week and was cleared to play, if needed, against the Missouri. However, Gamecocks coach Will Muschamp feared Bentley might not be mobile enough to protect himself and went with Scarnecchia, a senior making his first college start.

Scarnecchia, recruited by Steve Spurrier before 2014 season, was confident he would rise to the challenge. He got congratulatory texts from past Gamecock quarterbacks Connor Shaw and Stephen Garcia. A few people have wanted selfies or a moment of Scarnecchia's time when he has been out eating dinner the past few days.

Scarnecchia had not to set out to prove anything to himself, his coaches or teammates when he took the field. He is grateful, though, if he showed that South Carolina has another winning option should Bentley get injured.

"The coaches already know my ability," Scarnecchia said, "but to go out there and show my team, that meant a lot to me because now you've got a lot of players who are, 'Hey, man, if Jake goes down, you can step up.'"

Bentley and the Gamecocks will have to step up against Texas A&M, which has won all four meetings in the series since the Aggies joined the SEC.

He was battered by the A&M pass rush — sacked seven times — in a 24-17 loss last year where South Carolina was held to 23 yards rushing.

Bentley acknowledged it was odd standing the sidelines and only marginally being involved in giving Scarnecchia advice on coverages or answering questions. He is eager to get back on the field and correct what has not gone right this fall.

"It wasn't all on him, you know," Muschamp said.

The Gamecocks registered six drops against the Wildcats and struggled with just 128 yards rushing on 35 attempts.

Bentley said he's adjusted to wearing a knee brace, something he expects to do against Texas A&M. He's moving well at practice and has no fear of doing more damage if he plays.

"Moving forward, we're getting back on normal schedule," Bentley said.

Texas A&M coach Jimbo Fisher believes Bentley and Scarnecchia are similar players and he will prepare the Aggies with that mindset.

"We're going to face a good one whoever we face," Fisher said.

Muschamp said Bentley, despite some struggles this year, gives the Gamecocks the best chance to succeed. Bentley was a big reason the Gamecocks went from three wins the season before Muschamp arrived to nine wins last year.

"We've got two guys that have confidence that we can win with," Muschamp said. "I feel comfortable with both guys."