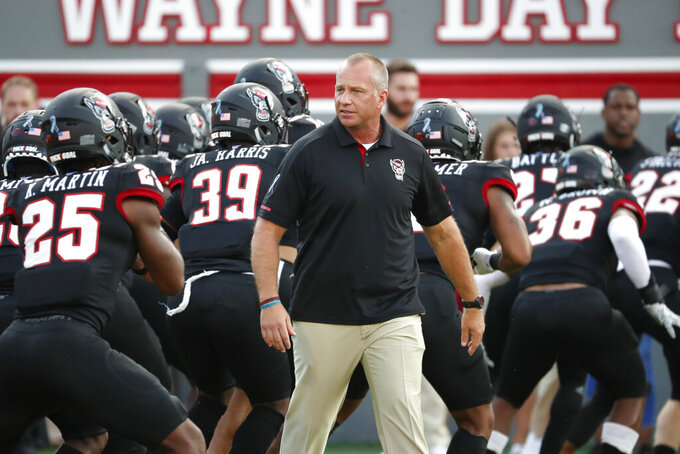 TALLAHASSEE, Fla. (AP) — Florida State and North Carolina State are searching for consistency on offense, which starts with their quarterbacks.

The Seminoles (2-2, 1-1 Atlantic Coast Conference) have had red-hot starts, scoring 21 points in the first quarter against both Boise State and Louisville.

Florida State is outscoring opponents 56-9 in the first quarter. The problem for the Seminoles is they haven't been able to do much after halftime and are being outscored 31-3 in the third quarter.

That kind of inconsistency, as well as a knee injury to James Blackman, has led Florida State coach Willie Taggart to evaluate who starts at quarterback against the Wolfpack (3-1, 0-0) on Saturday. Blackman, a 69% passer, has practiced this week for the Seminoles but they could also go with Wisconsin graduate transfer Alex Hornibrook, who led the team to a comeback win over Louisville last week.

"If James is healthy, James will start," Taggart said without declaring a starter on Thursday.

North Carolina State is also taking stock of an offense that Doeren said has been "pretty stale" in the first quarter of games, adding that the Wolfpack often "feel people out and make adjustments." They sputtered in last weekend's win against Ball State, managing 104 yards and five first downs with just two completed passes after halftime. The Wolfpack had a big punt return from Thayer Thomas and a blocked punt to offset the offensive troubles.

Starting quarterback Matthew McKay has had some good moments but has struggled to consistently connect downfield. North Carolina State gave his backup Bailey Hockman — who started his career at Florida State — a series in the Ball State game. Doeren said they had planned ahead of time to give him more than mop-up duty at the end of the game.

It's possible Hockman could get more playing time against Florida State if McKay struggles.

"We'll just have to see how much he's out there," Doeren said.

Regardless of who plays at quarterback for the Seminoles or Wolfpack, both teams are looking to piece together four good quarters on offense and build some momentum with a bye week ahead after Saturday's game.

For the first time In the 29-game history between the schools, North Carolina State has chance for a three straight win against the Seminoles.

Some other things to watch in Saturday's game:

Florida State junior tailback Cam Akers has 499 rushing yards, leading the ACC with a 124.8-yard per game average. His eight touchdowns (six rushing and two receiving) in four games matches his total from 12 games in 2018.

Akers and the Seminoles now face a Wolfpack defense that is 14th in the FBS against the run, allowing just 2.89 yards per carry and 76.5 yards per game.

North Carolina State has had a tough time building defensive cohesion due to injuries.

Defensive end James Smith-Williams hasn't played since he was injured in Week 2, though Doeren sounded optimistic about his chances to return Saturday. Fellow end Joseph Boletepeli missed the West Virginia game but returned last week against Ball State. And cornerback Nick McCloud hasn't played since the opener against East Carolina.

North Carolina State didn't play well in its first road game at West Virginia. Doeren is hoping that prepares them to play better this time around.

The Wolfpack had allowed a combined six points with no touchdowns through its first two games before visiting West Virginia on Sept. 14. But the Mountaineers — who had struggled offensively — posted 44 points and 445 yards in the win. Doeren said he thought his team "played slow" defensively in that game, and said the team lacked "great sideline energy" that day.

"It was a great experience in a bad way for our guys," Doeren said. "They learned a lot from that trip."

Hockman never played for Florida State but did show a glimpse of his talent in April 2018 inside Doak Campbell Stadium. The left-hander threw for 208 yards and a touchdown in the Seminoles' spring game. After falling short in an Aug. 2018 quarterback battle with Deondre Francois and Blackman, Hockman transferred to Hutchinson Community College before enrolling at NC State in January 2019.

North Carolina State is 19 of 19 on its red-zone trips this season, including 13 touchdowns. Florida State is 14 of 16 inside the opponents' 20-yard line, which includes 12 touchdowns.