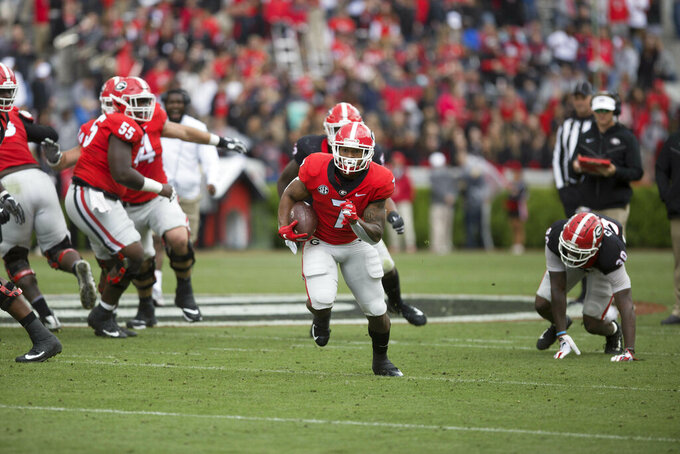 Georgia running back D'Andre Swift (7) runs the ball in the first half of the NCAA football spring G-Day game at the University of Georgia in Athens, Ga., on Saturday, April 20, 2019. (Jenn Finch/Athens Banner-Herald via AP)

The adjustment to the rule announced Tuesday means there will be no option for letting the call on the field "stand" during a targeting review. It must either be confirmed or overturned.

The panel also approved instituting a progressive penalty for targeting. Players who commit three targeting fouls in the same season are subject to a one-game suspension.

Overtime rules also were tweaked. If a game reaches a fifth overtime, teams will run alternating 2-point plays instead of starting another drive at the opponent's 25-yard line. The change was made to limit the number of plays from scrimmage and to bring the game to a conclusion.

Targeting, or illegal hits above the shoulders, would still result in a 15-yard penalty and ejection of the player who committed the foul. Players ejected in the second half would still be required to sit out the first half of the following game.

The goal of the rule adjustment is to call targeting more accurately and have fewer players ejected for borderline calls. The option to let a call on the field "stand" meant that the video review official didn't find enough evidence to reverse the call, so the 15-yard penalty and player ejection remained in effect. The rule adjustment puts the onus on the replay official to make a definitive call.

The overtime rule change was proposed after LSU and Texas A&M matched a record by playing seven overtimes in their regular-season finale last year. The Tigers and Aggies combined to run 207 offensive plays.

On average, 37 Bowl Subdivision games have gone to overtime over the past four seasons. Most end after one round of possessions. Only six games per season have gone past two overtimes, but the concern was those rare marathons came with increased injury risk for players.

The panel also approved the elimination of the two-man wedge formation on kickoffs that result in sprinting players running into double-team blocks. Also, it is now illegal to block an opponent with forcible contact on the blind side. It will be a personal foul with a 15-yard penalty. If the block also includes elements of targeting, it will be a blind-side block with targeting.