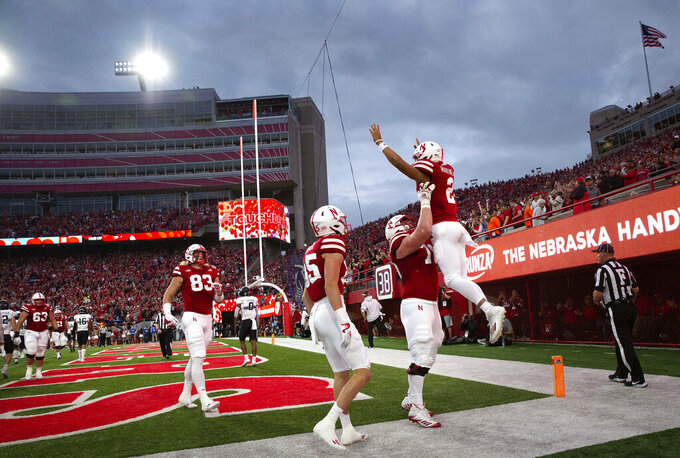 Nebraska's Matt Sichterman (70) lifts quarterback Adrian Martinez (2) in celebration of his touchdown alongside Wyatt Liewer (85) during the first half of an NCAA college football game against Northwestern, Saturday, Oct. 2, 2021, at Memorial Stadium in Lincoln, Neb. (AP Photo/Rebecca S. Gratz)

Looking to address the growing number of transfers, the NCAA Division I Council approved a one-year waiver Tuesday that will allow college football teams to sign up to seven players to replace those that leave.

Current NCAA rules state a team can sign no more than 25 players to a scholarship in any year. That includes incoming high school prospects and college transfers. The waiver will allow teams to sign 25 players, plus as many as seven transfers — not high school players — to replace those who transfer out in the first term.

Football players still cannot transfer during the season and become eligible to compete at their new schools.

With the loosening of transfer rules leading to more players switching teams, combined with the bonus year of eligibility granted to athletes who competed during the pandemic in 2020, coaches had two main concerns:

— Not being able to replenish a roster after a potential mass exodus of transfers.

— Not being able to sign a full complement of high school prospects because an increased number of scholarships were being used on transfers.

“We believe schools should have temporary flexibility to address possible roster depletion due to transfers,” Penn State athletic director Sandy Barbour, a member of the D-I Council, said in a statement. “This one-year waiver enables schools to properly utilize their their scholarship limitations.”

The waiver is expected to become official after the Division I Council meeting concludes Wednesday.