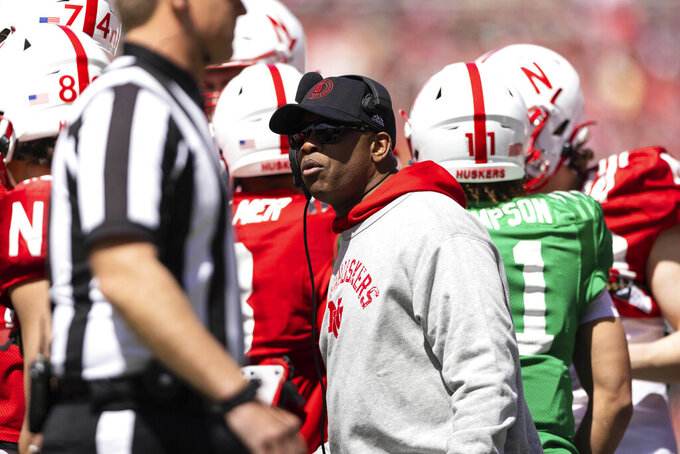 LINCOLN, Neb. (AP) — Nebraska fired Scott Frost on Sunday, the situation so dire in the once-proud football program that athletic director Trev Alberts made the move only three weeks before the coach's contract buyout would have been cut in half.

The Cornhuskers lost 45-42 to Georgia Southern as a three-touchdown favorite at home Saturday night, and the student section chanted “Fire Frost” at the end of the game.

Frost was 16-31 three games into his fifth season, and his .340 winning percentage was second-worst among Nebraska coaches who lasted more than four years.

“You run a professional organization that has high standards, (and) accountability has to matter,” Alberts said at a news conference. “Scott and I talked about this: 16-31 was not at a level that was acceptable to us.”

Associate head coach Mickey Joseph was named interim coach for the rest of the season. The Huskers play No. 6 Oklahoma at home this week.

Joseph, 54, is the first Black head coach at Nebraska in any sport and among four new members of the staff this season. Like Frost, he is a former Nebraska quarterback, having played from 1988-91.

“I won’t meddle in Mickey’s decision-making process,” Alberts said. “I encouraged Mickey to be the head coach and make decisions as the head coach. There’ll be some structural changes and things that I think Mickey believes in."

Alberts didn't elaborate on what changes Joseph would make. Joseph is scheduled to meet with reporters on Tuesday.

Joseph returned to Nebraska as wide receivers coach and passing game coordinator after coaching receivers at LSU from 2017-21. He also was LSU's assistant head coach his last two seasons there.

Alberts made a surprising move last November when he announced he would bring back Frost after what turned out to be a 3-9 season. Frost fired four offensive assistants, had his pay cut from $5 million to $4 million and agreed to having his buyout drop from $15 million to $7.5 million on Oct. 1.

Alberts said the university didn't try to negotiate a lower buyout and declined to comment on whether donors contributed the money to pay off Frost.

Alberts said firing Frost now gives him ample time to conduct a thorough search for the next coach. He said it would be best if the new coach were in place for the early signing period in December but added that the process won't be rushed.

The Huskers opened the season with a 31-28 loss to Northwestern in Ireland, struggled into the fourth quarter before putting away FCS North Dakota 38-17 and then allowed 642 yards while losing to a Sun Belt Conference team in Georgia Southern.

The 47-year-old Frost's spectacular failure was never envisioned when he left Central Florida as the hottest coach in America.

The storyline for his hiring was delicious, with Frost returning to his home state and the school he quarterbacked to a share of the 1997 national championship.

He had taken over a Central Florida program that went 0-12 in 2015, and two years later he led the Golden Knights to a 13-0 record and a Peach Bowl win over Auburn.

Frost, who grew up 90 minutes west of Lincoln in Wood River, was hailed as a savior of the program when former athletic director Bill Moos signed him to a seven-year, $35 million contract.

Moos boasted he had gotten “the pick of the litter” from the 2017-18 coaching cycle and that Big Ten powers would be “running scared” once Frost got the Huskers on track. Frost, when asked about having to possibly adjust his style to the Big Ten, shot back that he hoped the Big Ten would have to adjust to him instead.

What followed were four-plus seasons of underachieving and undisciplined play — and unhappiness among a loyal fan base desperately hoping for a return to a semblance of the program’s glory days.

There was never an indication that would happen under Frost. His Huskers were famous for losing close games — 22 of his 31 losses were decided by eight points or fewer — and for getting beat as double-digit favorites.

The Frost era was the worst at Nebraska since Bill Jennings was 15-34-1 (.310) in the five years before Hall of Fame coaches Bob Devaney and Tom Osborne reigned over four decades of sustained success that brought five national championships and 22 conference titles.

The Huskers have gone through five coaches since Osborne retired in 1997, and they are a shell of their former selves. They haven’t won a conference championship since 1999, and they haven’t won more than five games in a season since going 9-4 in 2016 under Mike Riley.

Frost was 10-26 in Big Ten games and, worse, 6-18 against West Division opponents. His teams never won more than three conference games in a season or finished higher than fifth place in the seven-team West.

Asked why he didn’t wait to make the change, Alberts said: “We owed it to the players, to give them a different voice, perhaps a slightly different vision. ... We needed to inject something into this team to give them the confidence and hopefully help them compete. I think nothing would please me more than to see a pretty significant change and help this team get over the hump and win some games.”