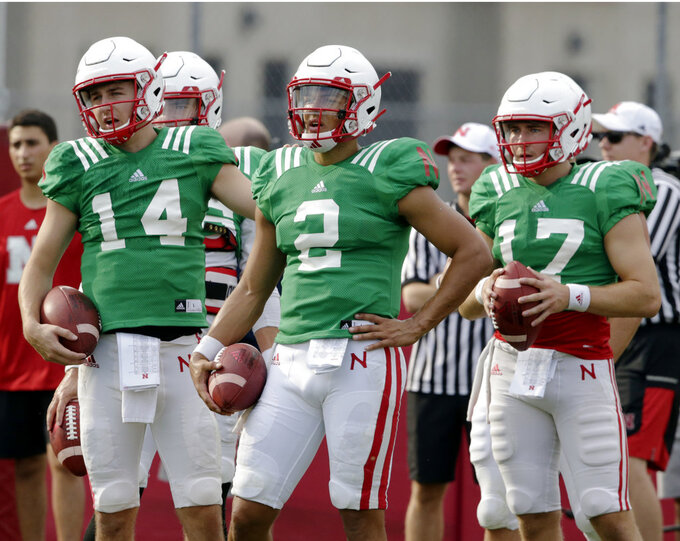 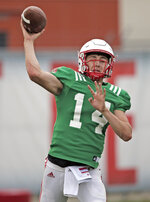 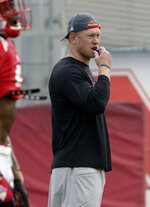 LINCOLN, Neb. (AP) — Mario Verduzco uses two words to describe the state of Nebraska's three-man quarterback race.
"Even steven," the Cornhuskers' quarterback coach said Wednesday.
Sorting out who takes the first snap in the Sept. 1 opener against Akron might take a while. No pecking order among Adrian Martinez, Tristan Gebbia and Andrew Bunch was announced entering preseason practice last week, and Verduzco said the three continue to get equal snaps with the No. 1 offense.
Many observers gave Martinez the edge after his strong performance in the spring game, but new coach Scott Frost said the competition would go until one man separates himself.
"Have you ever played Monopoly?" Frost said before the first practice. "You know how the race car, the horse and the iron and the battleship are on 'Go' to begin with? Everybody's on 'Go' right now."
Gebbia said Frost's analogy was mostly accurate.
"The one thing I would say is Monopoly is more of a game of chance and this is a game of will, competition," Gebbia said. "We're all doing a great job of trying to show we are who we think we are, and as long as we're winning games that's all that matters."
Whoever wins the job will play in a college game for the first time.
Martinez, from Fresno, California, graduated from high school in December so he could enroll at Nebraska in January.
Gebbia, from Calabasas, California, was recruited by former coach Mike Riley to play in a pro-style offense and redshirted his first year in Lincoln.
Bunch, a sophomore from Scottsdale (Arizona) Community College by way of Thompson Station, Tennessee, didn't appear in a game for the Huskers last year.
The 6-foot-2, 220-pound Martinez is considered the best fit for Frost's no-huddle, spread-option offense. He ran for three touchdowns and passed for another in the spring game, and he said a summer in the weight room has made him stronger and faster.
Martinez missed his senior season of high school football because of shoulder surgery, and he's made his greatest strides as a passer since the spring.
Verduzco breaks down a QB's throwing motion into two parts, what he calls "cha-ching." He said Martinez's "cha" is much better.
"He's always chattering at me about that," Martinez said. "It was a matter of bringing that quickness and speed and arm acceleration back, and coach Verduzco has been hammering it home with me. I feel better throwing the ball, I feel better with my 'cha-ching' — when you decide to throw the ball and when you throw it. You want to get the ball out quick."
Gebbia has had to make the biggest adjustment. He learned a much different offense under Riley. He's the most accomplished passer of the three, and his running ability has been a pleasant surprise to Frost and Verduzco.
"It's pretty clear that we can all do a great job with our legs and be a threat with our legs, which is the most important thing in this offense," Gebbia said. "This is an awesome system to run as a quarterback. There are a lot of high octane plays that can be made."
Bunch, on paper, should be the odd man out. Martinez and Gebbia were four-star recruits and Bunch is a walk-on.
"When we got out on the field," Bunch said, "I could tell there were no biases toward anyone as to who was going to play."
___
More AP college football: https://apnews.com/tag/Collegefootball and https://twitter.com/AP_Top25