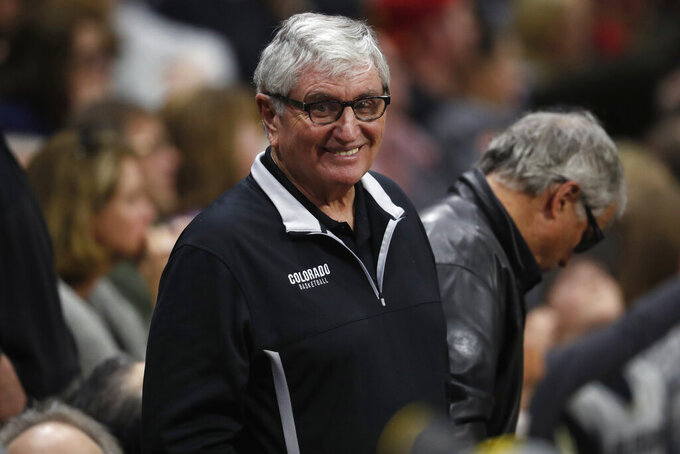 FILE - Retired Colorado head football coach Bill McCartney smiles duriung the second half of an NCAA college basketball game Saturday, March 9, 2019, in Boulder, Colo. By removing a potential stumbling block, Colorado has a chance to consistently win, just like in the days of Bill McCartney when the Buffaloes won their only national title. (AP Photo/David Zalubowski, File)

BOULDER, Colo. (AP) — As much as facilities, Folsom Field or the allure of trying to pull off a seemingly impossible rebuild, it was likely the fine print that brought Deion Sanders to Colorado.

College football's most electric coaching candidate, the Hall of Fame player now known as “Coach Prime,” almost certainly wouldn't have taken his talents to Boulder without a thorough review and rewriting of admissions rules at Colorado, an area in which the Buffs struggled to adapt to the new realities of the transfer portal.

In the new landscape of college football, players can move from school to school via the portal without having to sit out one season. The best of the best — see, Georgia, which wrapped up its second straight national title Monday night — have been among the elite in navigating the new rules. Because of its stringent admissions and transfer rules, Colorado had trouble getting in on that game.

But in the span of a month, changes are already happening thanks to a new initiative that makes credit review for transfer students a more seamless process. CU has received commitments from around 20 players off the transfer portal and is ranked first by 247 Sports on its transfer football team rankings.

“This is a game-changer,” university Chancellor Philip DiStefano said in an interview with The Associated Press. “They (transfers) want to know immediately if (their credits) are acceptable, and if they’re eligible to play. They don’t want to wait two weeks, three weeks, or five weeks.”

For years, a key disadvantage in luring transfer students to Colorado was that it didn't have a streamlined way to accept credits from varying classes from different schools. Under the new rules in this pilot program, transfers will be able to more easily move credits from their previous schools that don't have a matching major at CU. In an ultracompetitive landscape involving in-demand athletes, the quicker process is expected to put Sanders on a more level playing field.

And gone is the old system that was a losing proposition for Sanders' predecessor, Karl Dorrell, who not only struggled bringing in big-name players from the transfer portal due to the obstacles at CU, but also lost numerous playmakers that way. Dorrell was dismissed in October following an 0-5 start.

Sanders' arrival has big portions of CU's fan base imagining a return to the glory days of Bill McCartney, who brought the school its only national title. That was the 1990 season, during an era long before the transfer portal, and before Colorado had significantly tightened its recruiting practices. It took the coach four years to post a winning record. Colorado's only national title came in McCartney's ninth year in the program.

The days of the patient rebuilding project are all but over in college sports. Colorado, like most struggling schools, is in the market for a Lincoln Riley-type resurgence. In the span of one year, Riley used transfers to turn a 4-8 Southern California program into an 11-3 team with a Cotton Bowl berth.

Sanders' biggest early wins include his own son, quarterback Shedeur Sanders, who transferred from Jackson State with him and will be eligible right away. Same for highly touted cornerback/receiver Travis Hunter.

Thanks in large part to the transfer portal, some college observers see a realistic path from 1-11 — CU's record in 2022 — to a bowl game within a season or two. According to FanDuel Sportsbook, the early line for Colorado's win total in 2023 is 4 1/2. It takes six wins to be bowl eligible. And even if "Coach Prime" succeeds, then leaves for a bigger program, the changes he negotiated could help CU far down the road.

“His impact has already been substantial in that the transfer-portal rule has changed. So any future coach has the freedom to be able to go out and compete for student-athletes,” said Charles Johnson, a quarterback on the national championship team.

Colorado's path could potentially become even simpler thanks to another seismic shift in college sports — conference realignment, which will send both USC and UCLA to the Big Ten in 2024.

Among the schools remaining in the Pac-12, Stanford is struggling with some of the same issues as Colorado. But David Shaw's recent resignation after going 14-28 over the past four seasons did not bring with it a CU-like shift. Stanford has a famously strict transfer policy, and a recent meeting of the university's faculty senate didn't signal any changes to that soon.

At Colorado, the fans and administration are tired of losing. In addition to cutting through the academic red tape, Sanders' arrival has opened some pocketbooks of a Buffaloes booster class that has long dreamed of fielding a title contender, but hasn't truly been willing to pay for it.

Under the new NIL rules — in which players get paid for using their name, image and likenesses in promotional deals — schools are encouraging boosters to give to so-called collectives, which use the money to create deals for players. At Tennessee, for example, an NIL collective has a goal of raising $25 million a year to funnel into the pockets of players.

The website cuatthegame.com posted a letter that said the collective at Colorado, the “ Buffs4Life Foundation,” had raised about $100,000 — 10% of its goal for its first year — as of Dec. 29, about four weeks after Sanders' hiring was announced.

“In Colorado’s case, the program needed a jolt of life and hiring somebody like Coach Prime is probably an unmatched or unrivaled way to drive that hope, drive that excitement,” said Sam Weber, senior director of brand marketing and communications at Opendorse, a company that works with schools and collectives on NIL activities. ”I expect that to turn into more donations or more funds for the collectives that are operating surrounding Colorado athletics.”

This is, by most accounts, as bright as things have looked in Boulder since before the dismissal of Gary Barnett in 2005. It was during Barnett's tenure that recruiting policies were severely tightened in the aftermath of a long-running case involving alleged rapes at an off-campus party attended by recruits and players in December 2001.

Barnett was cleared of wrongdoing, but the school president and athletic director both lost their jobs. None of the five full-time head coaches that followed Barnett, who stepped down in 2005, have left Colorado with a winning record.

Sanders' arrival, not surprisingly, sparked 1,800 deposits for new season tickets, while more than 11,000 fans have filled out interest forms. What’s more, the team store has had six of its largest revenue days ever since the hiring of “Coach Prime,” who is trying to tap into what is thought of as one of the most inviting campuses in the nation but one that has not been the draw that some Colorado fans believe it could be.

To hear the optimists tell it, the confluence of dreaming big and a return to Colorado’s glory days could all come together as soon as Sept. 9. The Buffs host Nebraska, their old rival from the Big 12 days, in a game that seems ripe for a visit from ESPN’s College GameDay, which would undoubtedly love to see more of Sanders on its airways in the future.

“Individuals I went to high school with 60 years ago are saying, ‘Way to go. This is wonderful,'" DiStefano said. "Just turn on ESPN, turn on Fox — somebody’s talking about Coach coming here. We’ve not had that type of national publicity.”