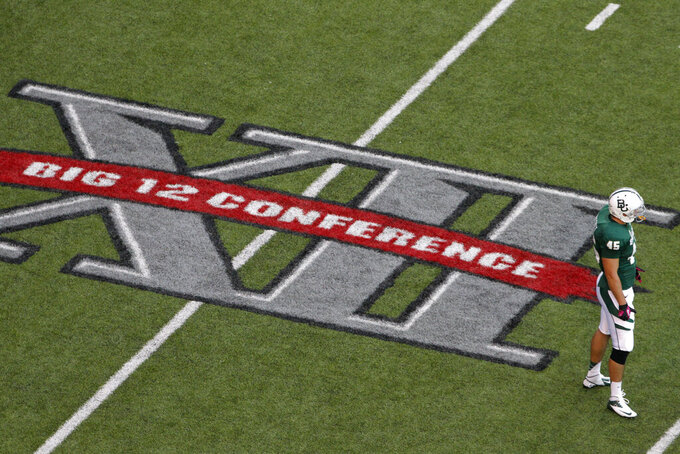 FILE - In this Oct. 13, 2012, file photo, Baylor's Matt Ritchey (45) stands by the Big 12 Conference logo on the field during an NCAA college football game against TCU in Waco, Texas. The Big 12 has agreed to a deal with ESPN that gives the network rights to all football championship game through 2024 and makes the league the first Power Five conference to provide exclusive content to ESPN+, the cable giant’s subscription online streaming service. (AP Photo/Tony Gutierrez, File)

The Big 12 has agreed to a deal that gives ESPN the rights to all football championship game through 2024 and makes the league the first Power Five conference to provide exclusive content to ESPN+, the cable giant's online subscription streaming service.

Sports Business Journal Daily first reported ESPN will pay the conference about $40 million more for these new rights from 2019-24 on top of what it pays for existing deals. A person with direct knowledge of the contract confirmed the value to The Associated Press on condition of anonymity because the network and conference were not speaking publicly about financial terms.

The new agreement calls for Big 12 content on ESPN+ to be branded specifically for the conference, creating a de facto digital conference network.

The deal calls for each school, except Texas and Oklahoma, to have one football game per season exclusively shown on ESPN+, starting in 2020. Baylor, Kansas, Kansas State and Oklahoma State will have football games on ESPN+ starting this season and Iowa State, West Virginia. TCU and Texas Tech will join them in 2020.

Also, all Big 12 men's basketball games not appearing on an ESPN television network — expected to be at least 75 per season — will be shown on ESPN+.

Fox and ESPN share television rights to Big 12 games and are in the middle of 13-year deal worth $2.6 billion signed in 2012. Three years ago the Big 12 brought back its football championship game, and while ESPN paid for the rights to the even-year games, Fox declined to buy the rights to the 2019, '21 and '23 editions.