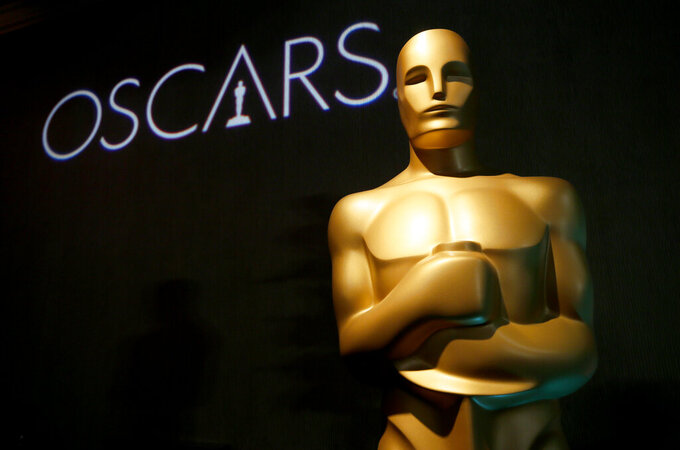 FILE - In this Feb. 4, 2019 file photo, an Oscar statue appears at the 91st Academy Awards Nominees Luncheon in Beverly Hills, Calif. A spokesperson for the Academy of Motion Picture Arts and Sciences said Monday that the awards for cinematography, film editing, makeup and hairstyling and live-action short will be presented off-air. The winning speeches will air later in the broadcast and will also be live-streamed on Oscar.com and the film academy’s social accounts. The plan to change up the format in service of a truncated three-hour runtime was announced in August. (Photo by Danny Moloshok/Invision/AP, File)

LAS VEGAS (AP) — Perhaps you weren't sure — or didn't care — if Gisele Bundchen's husband and the New England Patriots won the Super Bowl this month. But you know why "The Favourite" is a favorite to win an Oscar for best costume design and you're willing to bet on Lady Gaga snagging some hardware for her performance in "A Star is Born."

Now, for the first time in the United States, you can legally bet on one of pop culture's biggest nights.

New Jersey is the first state in the U.S. to allow sportsbooks to accept wagers on the Oscars, taking after a common practice in Europe and giving American fans another option besides informal office pools.

Casinos see it as a way to attract more customers to the sportsbook, even with limited bets.

"We have customers who aren't huge sports fans, but enjoy playing games like bingo or roulette with us," said Mattias Stetz, chief operating officer of Rush Street Interactive, which operates PlaySugarHouse.com in New Jersey. "We believe a new audience may be fans of the Oscars and want to make their viewing experience even more exciting by placing a bet on their favorite movie."

SugarHouse has "Roma" as a big favorite to win best picture at the ceremony scheduled for Feb. 24. Some casinos are accepting bets only on best picture nominees, while others are offering more options, like best director, best actress and best actor.

While sportsbooks sometimes accept six- and seven-figure wagers on football games and other sports, the limits for the Oscars are much smaller. Some set the limit for the amount wagered at $500 a bet.

Sportsbooks in New Jersey began opening last spring, when the U.S. Supreme Court struck down a federal ban on sports wagering. The ruling put an end to Nevada's effective monopoly on that form of gambling.

Sportsbooks in Nevada have never offered wagers on the Oscars. The state has a long history of resisting wagering on non-sporting events — even explicitly banning bets on things like elections — but opened up slightly in 2011 by allowing wagers on the World Series of Poker, the first event bets allowed on something beyond a traditional sport. A Nevada casino asked to offer the Oscars in 2012 but was denied. Over the last four years, Nevada regulators have allowed wagers on votes for things like Super Bowl MVP, the Heisman Trophy in college football and AL and NL MVP in baseball.

A.G. Burnett, former chairman of the regulatory Nevada Gaming Control Board, said the decision from regulators to approve bets on non-sporting events rests on several factors, including how the event is supervised and whether the event's outcome is verifiable and generated by a reliable and independent process.

New Jersey's move got off to a rough start. Sportsbooks began offering odds on the awards ceremony after getting the OK from regulators, but they were later asked to temporarily take them off their boards.

"We saw something we wanted to look into a little more closely," David Rebuck, director of New Jersey's Division of Gaming Enforcement, said after the odds were back up. He would not specify what regulators were reviewing.

The book also picked Alfonso Cuaron to take a statue home for directing "Roma," at minus-1,000.

Oddsmakers have Glenn Close as an odds-on favorite for best actress for "The Wife." But many fans in New Jersey disagree.

Nick Bogdanovich, William Hill's director of trading, said Lady Gaga has been the most popular choice among bettors. Fifteen of the 82 tickets that the operator had written on the event as of Friday were for the star to best Close, Olivia Colman, Yalitza Aparicio and Melissa McCarthy.

"I don't know if that's horrible, great or what because it's the first go round," Bogdanovich said of the total number of tickets. "But I guess 82 tickets is 82 tickets regardless of whether it is on NBA, baseball or whatever. I was just happy that we were able to book it... The more diverse we can get the better."