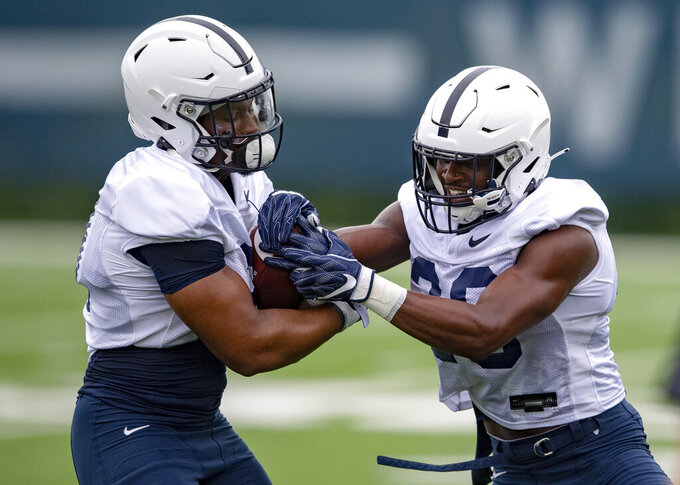 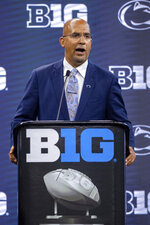 Although Penn State’s quarterback is taking cues from his third offensive coordinator in as many years, and fourth since he arrived on campus, Clifford has plenty of reasons to be hopeful.

Coach James Franklin believes new play-caller Mike Yurcich will help the 19th-ranked Nittany Lions return to their 2016-2019 form, when they scored 30 points or more in 35 of 53 games and never averaged less than 34 per game.

Yurcich was hired in January and has ingratiated himself with Penn State’s skill position players with his version of the spread. He used it at Oklahoma State from 2013-18 where the Cowboys were frequently in the top 10 nationally in scoring (38), passing yards per game (315.9) and total offense (478.6).

“What his offenses do, how they get receivers the ball, the production that they have in the offense, it’s really exciting,” receiver Jahan Dotson said.

It’s been easier to learn with fewer COVID-19-related precautions.

Last summer, rather than working in small groups with receivers or getting extra time in the film room as he usually would have, Clifford played chess to stay focused between shortened practice sessions.

The lack of quality practice coupled with so many new players to break in quickly snowballed. During its 0-5 start, Penn State averaged just 24 points per game. Franklin’s team won four straight afterward.

“It’s hard to compare anything to how it was last season,” Franklin said. “I don’t think that’s necessarily fair to some of the coaches, you know, that were put in that situation last year. But I love where we’re at, we’re way ahead.”

Franklin has introduced a new wrinkle: The Nittany Lions are running double sets of 11-on-11s. When the starters are drilling against the starters, the second units are mirroring them.

“The best way to get guys confidence and understanding of what we’re trying to do is by doing it,” Franklin said.

Dotson is a big reason why Penn State will enter Week 1 on a four game winning streak.

He led the team with 52 catches for 884 yards and eight touchdowns, of which 21 catches, 357 yards and two scores came in the final four games. He also returned four punts for 133 yards and a touchdown in that span.

Fellow wideout Parker Washington is also back and offers a different flavor on the outside. Built like a fullback from the waist down, the 5-foot-10, 207-pound Washington has raised eyebrows this summer.

“I think he’s got enough unique other qualities that make up for him not being 6-foot-2,” Franklin said.

Noah Cain scored eight touchdowns as a freshman in 2019 before a lower-body injury limited him to one play a year ago. Keyvone Lee, Caziah Holmes and Devyn Ford got more work in his absence.

Transfer John Lovett has more experience than all of them with 20 starts and 42 games played for Baylor.

“We’ve kind of got an interesting dynamic in there,” Franklin said. “It’s really a good mix of personalities and styles in that room.”

Both lines are works in progress as each unit looks to replace a handful of pieces. Primarily, a few interior linemen, a host of pass rushers and one defensive tackle.

Offensive tackles Rasheed Walker and Caedan Wallace will anchor the line along with senior guard Michael Miranda. Franklin expects about seven other players to realistically compete for playing time.

Defensive coordinator Brent Pry has been using linebacker Jesse Luketa at defensive end to make up for the departures of three of the team’s top pass rushers. Expected starter Adisa Issac will also miss the season due to an unspecified injury.

Penn State opens at No. 12 Wisconsin on Sept. 4 and will host an SEC opponent for the first time in a decade when Auburn visits Beaver Stadium on Sept. 19. Ranked foes await on Oct. 2 against No. 17 Indiana and on Oct. 9 at No. 18 Iowa before a showdown with No. 4 Ohio State in Columbus.