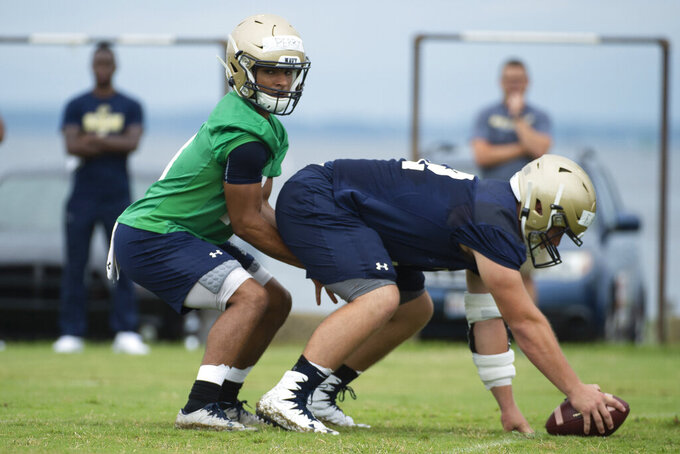 FILE - In this Aug. 2, 2019, file photo, Navy quarterback Malcolm Perry preparers to take snap from offensive lineman Nick Bernacchi during NCAA college football training camp in Annapolis, Md. Much of the team’s success could hinge on how well Perry is able to execute the offense. He completed nine of 25 pass attempts for 222 yards with two touchdowns and an interception over 13 games in 2018.(AP Photo/Tommy Gilligan, File)

ANNAPOLIS, Md. (AP) — In the wake of his worst season Navy's football coach, Ken Niumatalolo made widespread changes to his standard formula for success.

As a result, Niumatalolo altered Navy's attack on both sides of the ball.

He hired Brian Newberry as the defense coordinator, replacing Dale Pehrson, who retired after 23 years with the program. Newberry plans to play more aggressively and keep the opposition off balance with multiple coverages.

"He is very creative and does some exotic stuff," Niumatalolo said. "Coach Newberry just has that 'it' factor. He has great leadership qualities, a presence that people gravitate toward."

With all that going on, Niumatalolo is confident the Midshipmen are poised for a bounce-back year.

"After doing this for 35 years, I know when a good team is coming together," he said. "I really believe this can be one of the great football teams at the Naval Academy."

Niumatalolo has been especially pleased with the progress of senior quarterback Malcolm Perry. The Midshipmen spent the offseason implementing elements of the run and shoot, which features spread formations and relies on receivers to adjust their routes based on coverage. Much of the team's success could hinge on how well Perry is able to execute this offense. He completed nine of 25 pass attempts for 222 yards with two touchdowns and an interception over 13 games in 2018.

Overall, Navy averaged 72.8 passing yards per game, which ranked last (130th) among FBS programs. Niumatalolo knows those numbers need to improve to keep up in the American Athletic Conference.

"We're an option team and I believe we have the best option staff in the country," Niumatalolo said. "But we have to get better in the passing game. We want to do some run-and-shoot stuff because it's very similar to option schemes in that you have to adjust to coverages."

The Midshipmen initially adopted the motto "Load the Clip" for the upcoming season. However, Naval Academy Superintendent Vice Admiral Sean S. Buck called an audible, saying it was "insensitive" to those affected by a couple of mass shootings in the region last year. So Navy's captains implemented a new slogan: "Win the Day."

Niumatalolo put an added focus on his player's nutrition this offseason, which has become an increasingly critical part of major college football programs. Navy hired Scott Maher in June as an assistant athletic director for dietetics and sports performance. The staff is monitoring the players' weight and their hydration following practices and games. The players also have access to a fueling station on the practice field that is stocked with protein bars, fruit, applesauce, fruit cups and other items high on carbohydrates and protein.

The Midshipmen resume their annual game against Notre Dame, which reached the College Football Playoff last year. Navy is also looking to snap a two-game losing streak to Army, which won the Commander-In-Chief's Trophy last year. The Midshipmen went 2-6 in the AAC and faces three conference teams that advanced to a bowl game last season: Memphis, Tulane and Houston.