No. 1 Alabama, No. 4 Georgia return to scene of thriller 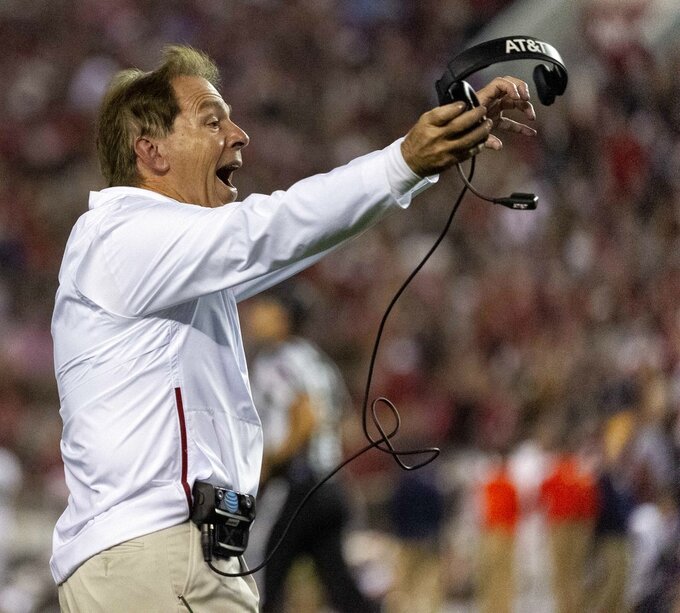 Alabama head coach Nick Saban reacts to a call during the second half of an NCAA college football game against Auburn, Saturday, Nov. 24, 2018, in Tuscaloosa, Ala. (AP Photo/Vasha Hunt) 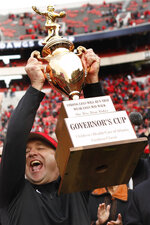 For the second time in less than 11 months, the two Southeastern Conference powers are set to meet at Atlanta's Mercedes-Benz Stadium with a championship on the line in a mentor-versus-protege coaching showdown. Tua Tagovailoa's back, too, this time as anything but an understudy.

Kirby Smart's fourth-ranked Georgia Bulldogs (11-1, 7-1 SEC) get another crack at Nick Saban and No. 1 Alabama (12-0, 8-0) on Saturday in the SEC championship game. They put on quite a show in an overtime thriller with a national title on the line back in January.

Tagovailoa came off the bench to lead a second-half comeback and returns as perhaps the Heisman Trophy front-runner.

A rematch almost seemed inevitable with both teams clearly the cream of their divisions. But Smart says the Alabama rematch couldn't be a focal point because "certainly both teams had to win some football games to get to it."

That future-oriented mentality wouldn't fit The Process, Saban's acclaimed methodology that Smart absorbed as his longtime assistant at Alabama, LSU and the NFL's Miami Dolphins.

"I've never been around really good teams that are focused on other teams," Smart said. "The good teams I've been around are focusing on whoever they play that week. And it's really not been different for us this year.

Both teams dispatched their in-state rivals with relative ease leading up to this game. Georgia raced to a 38-7 halftime lead in a 45-21 win over Georgia Tech . The Tide struggled in the first half but ran away from Auburn, 52-21.

But they've known this meeting was coming since Nov. 3, the earliest the title game matchup has been set. Really, they've been on a collision course since that national title clash.

Saban called the Bulldogs "probably one of the most complete teams in the nation in terms of offense, defense, special teams."

"This will be the most challenging game that we have all year," he said. "I'm really proud of our guys for what they've been able to accomplish this year. Why guys come to this school is they get to play in games like this against great teams, and this will be a great challenge for us."

Alabama has won every game since the national title game by 20-plus points, a 12-game streak that is the longest to open a season in NCAA history. The previous record of 10 consecutive 20-point wins at any point during a season was set by Boise State in 2002.

Alabama has reached the 12-win mark for the ninth time in the last 11 seasons.

The Bulldogs haven't had that kind of sustained success, but they've been awfully good the past two years.

They have won five straight by 17-plus points since dropping a similarly lopsided game to No. 12 LSU.

The reward: An Alabama rematch.

The January meeting ended with Tagovailoa's winning, second-and-26 touchdown pass to DeVonta Smith in overtime. Now, Tagovailoa could perhaps cement the Heisman if he's as good for four quarters as he was for two on that last visit. He wasn't particularly interested in talking about either the Heisman or the end of last season after Saturday's win over Auburn.

"That was last year," Tagovailoa said. "For me, I just want to enjoy this win with my team, with that 24-hour (celebration) rule. And coming back into the office on Monday, we want to focus on Georgia."

There's no getting around it now, guys.