No. 1 Alabama opens as huge favorite over Utah State 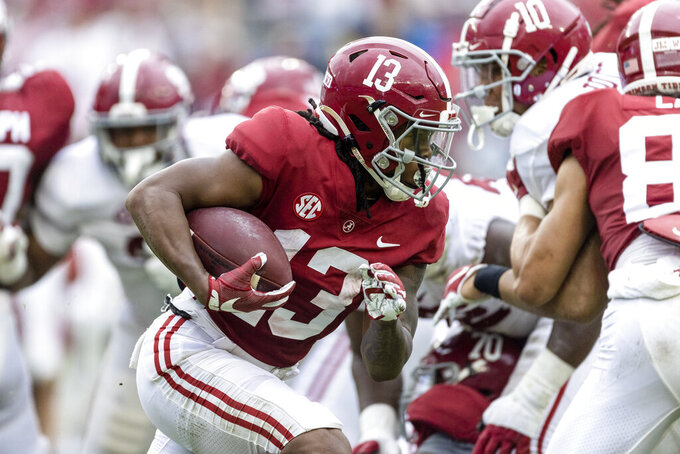 For Alabama coach Nick Saban, it’s all about “setting a standard for how we want to play.”

That’s the top-ranked Crimson Tide’s focus heading into the opener against Utah State (1-0) on Saturday at Bryant-Denny Stadium after an offseason of looking at that so-called participation trophy staged as a message in the team's cafeteria.

“We’re looking forward to finding out exactly where our team is,” Saban said.

This game won’t go far toward determining Alabama's final destination in its bid for a national title after a runner-up finish. Not against a six-touchdown underdog.

But it's a chance to showcase the new playmakers surrounding Heisman Trophy-winning quarterback Bryce Young.

And Utah State did go 11-3 in coach Blake Anderson's debut season. The Aggies finished with a No. 24 ranking and then opened with a 31-20 win over Connecticut.

None of that swayed the oddsmakers much against an Alabama team still stewing over that loss to Georgia in the national championship game.

Anderson called the Tide “maybe the best team on the planet.” Young and national defensive player of the year Will Anderson Jr. head an Alabama team widely hailed as the one to beat this season.

“There are just no weaknesses. There just aren't,” Blake Anderson said. “We've got to focus on us, focus on getting better. We cannot focus on Alabama this week or we'll go in starry-eyed and look up and it'll be halftime and the game will be over.”

Gibbs has drawn rave reviews from coaches and teammates — and Blake Anderson, too.

Alabama has been unbeatable in its home opener the past two decades. The Tide are riding a 20-game winning streak in the annual Bryant-Denny Stadium debut, including 15-0 under Saban. Alabama has outscored opponents in those games under Saban by an average of 40.7-11.7 points.

A couple of true freshmen moved to the top of Alabama’s depth chart. Wide receiver Kobe Prentis is the starting slot receiver with JoJo Earle out with a broken foot. Noseguard Jaheim Oatis, a 6-foot-5, 370-pounder, is listed as a co-starter with incumbent DJ Dale. Meanwhile, Utah State has four offensive line starters listed as graduate transfers, with freshman Weylin Lapuaho listed as a potential starter at right guard.

Both defenses have been adept at knocking opposing offenses backward. Alabama has the nation’s top sack leader from 2021 in linebacker Will Anderson, along with Dallas Turner among other pass rushers. Utah State had 11 tackles for loss against UConn and finished tied for second-most nationally last season with 114.

The competition continues for Alabama's cornerbacks. Kool-Aid McKinstry and LSU transfer Eli Ricks are listed as co-starters at one spot. Terrion Arnold or Khyree Jackson will get the nod at the other.