No. 1 Clemson looking for consistency from offensive leaders 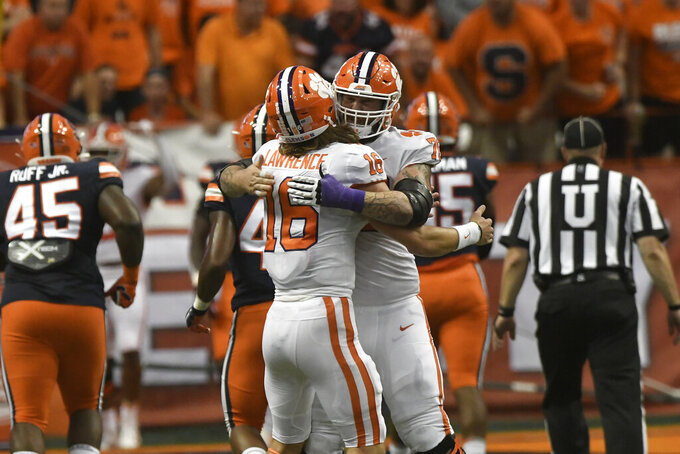 Clemson quarterback Trevor Lawrence (16) is congratulated by Chandler Reeves after a score against Syracuse during the first quarter of an NCAA college football game Saturday, Sept. 14, 2019, in Syracuse, N.Y. (AP Photo/Steve Jacobs)

Scoring points has not been a problem for the top-ranked Tigers, they just haven't done it with the panache and style many expected from a group led by quarterback Trevor Lawrence and tailback Travis Etienne.

"The quality of a good team is how you improve each week and I'm sure we'll do that," said Scott, who is also Clemson's receivers coach.

Scott believes the offense is ahead of where it was a year ago during its national championship season — despite his stars' inconsistent play through the first quarter of the season for Clemson (3-0).

Lawrence is piling up the interceptions with five after throwing only four all of 2018. Etienne opened with a career-best 205 yards and three touchdowns in a 52-14 romp over Georgia Tech on Aug. 29, but has gained just 129 yards and no touchdowns the past two games.

Scott said the Tigers are far from a finished product and look to take another step forward against Charlotte (2-1) of Conference USA at home Saturday night.

"The only way to be great is to wake up every morning looking for ways to improve and get better," he said. "It doesn't matter what happened good or bad, we've got to improve."

Charlotte is looking forward for the opportunity to square off against the Tigers.

The 49ers have cranked up their offensive output this season, averaging better than 47 points through three games. Still, they understand the challenge ahead in their first-ever meeting with Clemson.

"We can't let this get away from us," he said. "We've got to lock into the future and take everything one game at a time, one play at a time."

Clemson can relate to that approach.

The sluggish start by Lawrence and Etienne hasn't stopped the attack from putting up some gaudy numbers. The Tigers are 13th in the country and tops in the Atlantic Coast Conference at more than 544 yards a game.

Individually, Lawrence sits 23rd nationally and fourth in the ACC at 277 yards passing per game. Etienne is 13th in the FBS and third in the ACC with 334 yards. It's good, Clemson coach Dabo Swinney says, just not yet elite.

"We're not a championship-caliber team right now," Clemson coach Dabo Swinney said. "But I don't know anyone who is in September."

Swinney sees his club as too inefficient offensively with too many three-and-outs when sustained drives could've put away opponents even sooner.

Lawrence, the 6-foot-6 sophomore QB, gets a lot of attention when things are going well and is often the lightning rod for criticism when they don't — even after passing for 395 yards and three touchdowns in a 41-6 win at Syracuse last week.

"Everybody's entitled to their opinions," Clemson center Sean Pollard said. "We just don't listen to it."

But the Tigers say it's a team effort win or lose, and do what they can to make up for anyone's on-field errors — including their heralded quarterback.

Lawrence accepts that criticism comes with his position.

"It doesn't really matter what you do, everyone's going to talk about the bad," said Lawrence, who shared ACC quarterback of the week honors with Virginia's Bryce Perkins. "We try to keep everything internal. We know what this team is capable of and we know who we are. We try and stay locked into that."

Lawrence said the outside talk doesn't bother him, especially when he's connecting with the Tigers' group of talented receivers for big plays. Tee Higgins had seven catches for 150 yards while Amari Rodgers had four receptions f or 121 yards, including touchdowns of 16 and 87 yards.

"We try not to listen to all the outside noise," Lawrence said. "That's just how it is."