No. 1 Clemson looks for 27th straight ACC win vs. Syracuse 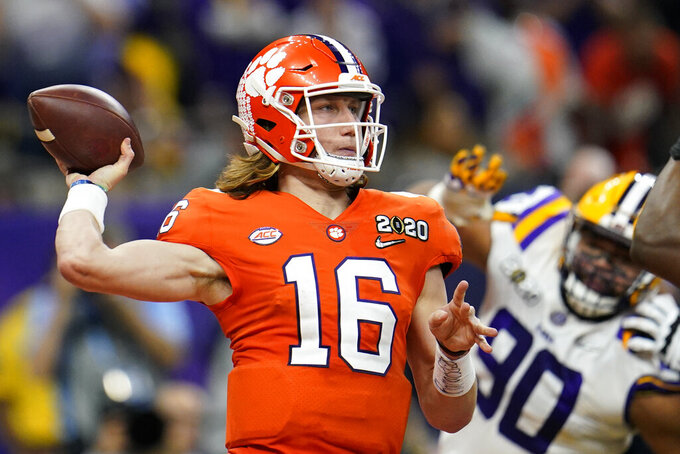 Clemson quarterback Trevor Lawrence passes against LSU during the first half of a NCAA College Football Playoff national championship game Monday, Jan. 13, 2020, in New Orleans. Georgia Tech will play at home against the nation's top-ranked team for the first time in 40 years when No. 1 Clemson, let by the high-profile tandem of quarterback Trevor Lawrence and running back Travis Etienne, puts its perfect record on the line on Saturday, Oct. 17. (AP Photo/David J. Phillip, File)

Clemson's run at another perfect regular season. The Tigers have not lost a regular-season game since 2017 at Syracuse. Since, they've won 26 straight over ACC games — and they're heavy favorites to keep things going against the Orange. Syracuse is struggling to show signs of life and give the school reason not to jettison embattled coach Dino Babers.

Clemson tailback Travis Etienne vs. Syracuse's defense. Etienne is the two-time defending ACC player of the year making a case for three in a row. He's rushed for 465 yards and five TDs despite spending much of the second half on the bench with scores out of hand. Syracuse enters dead last in ACC rushing defense, allowing 12 rushing touchdowns this fall.

Syracuse: LB Mikel Jones leads the Orange in tackles and in takeaways with three interceptions and two fumble recoveries. He is tied for the lead in the Football Bowl Subdivisions with his three picks.

Clemson: QB Trevor Lawrence. Better look quick or Lawrence could be on the bench with the game out of hand in favor of the Tigers. Lawrence has thrown for 1,544 yards and 15 touchdowns this season with his near flawless play — although he did throw his first pick of the season last week.

Syracuse appeared to be a rising challenger to Clemson in the ACC after defeating the Tigers in 2017 and losing late in a 27-23 Clemson victory at Death Valley the following season. ... Tigers had 17 players with a reception in a 73-7 win at Georgia Tech last week, the most in coach Dabo Swinney’s 12-plus seasons. ... Syracuse has won the turnover battle in 12 consecutive games. It has gone 3-9 in that stretch. ... Clemson has won its past 26 home games, dating to a Nov. 2016, 43-42 loss to Pitt. ... Clemson has scored at least 37 points in its first five games, the longest such streak in school history. ... Syracuse has started four freshmen on defense in each of its last two games.