No. 1 Georgia faces No. 3 TCU for CFP national championship 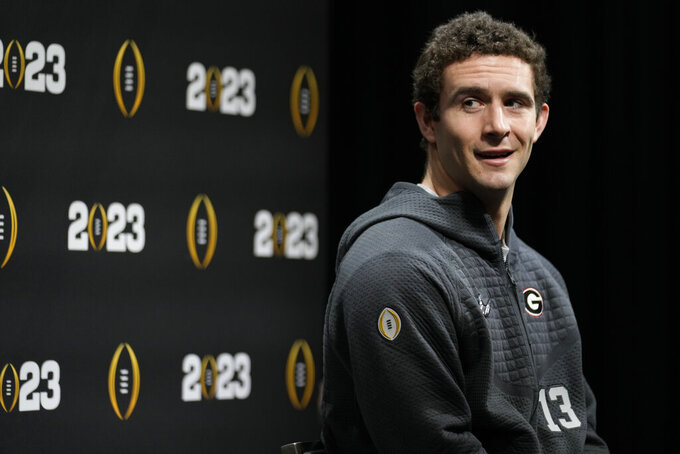 A chance to enter the dynasty conversation for Georgia. The Bulldogs would become the the first school to win back-to-back College Football Playoff championships since its inception in 2014 and the first repeat national champion since Southeastern Conference rival Alabama did it in 2011 and '12. TCU has one national title to its credit from 1938. The Horned Frogs would be the first Big 12 team to win the CFP and the first from the conference to win a national title in football since Texas in 2005.

TCU's running game against Georgia's front seven. The Horned Frogs ran for 263 yards against Michigan in the Fiesta Bowl, even with leading rusher Kendre Miller sidelined most of the game with a knee injury. Miller is a game-time decision. RB Emari Demercado stepped up with 150 yards on 17 carries last week. Creating holes against All-America DT Jalen Carter, starting LB Jamon Dumas-Johnson and the rest of the Bulldogs' big and athletic front seven likely will require a healthy dose of QB Max Duggan in the running game.

TCU: WR Quentin Johnston. Nagged by injuries much of the season, Johnston broke out against Michigan with 163 yards on six catches. He has the size (6-foot-4, 215 pounds) and speed to be the first receiver selected in the next NFL draft.

Georgia: TE Brock Bowers. The Bulldogs' most dynamic playmaker on offense. He lines up all over the formation and will even take a handoff or two. Bowers leads the team with 56 catches for 790 and six touchdowns. He also has rushed for three scores.

Georgia QB Stetson Bennett has accounted for 31 touchdowns and was the school's first Heisman Trophy finalist since 1992. He is 177 yards shy of 4,000 yards passing this season and threw two fourth-quarter TD passes to lead the Bulldogs to a comeback win in the Peach Bowl semifinal against No. 4 Ohio State. ... The victory against Michigan was TCU's ninth of the season by 10 points or fewer. ... Duggan, the Heisman Trophy runner-up, has 32 touchdown passes and only four interceptions. He also has run for eight scores. ... Georgia TE Darnell Washington, a matchup nightmare at 6-7 and 270, expressed optimism he would be able to play after missing much of the Peach Bowl with an ankle injury. ... There has been only one national championship game since USC and Texas played for the title after the 2005 season that included no SEC teams. The first CFP championship was Ohio State over Oregon.