No. 1 Georgia favored in SEC championship against No. 11 LSU 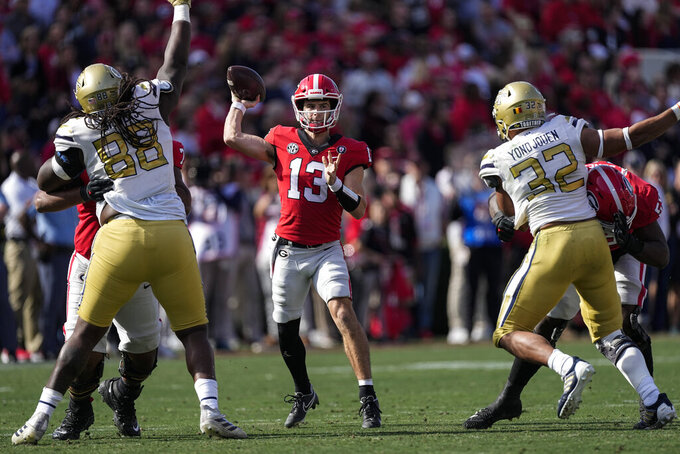 Georgia is looking to protect its No. 1 CFP ranking, which would give the Bulldogs a preferable home-state Peach Bowl location in Atlanta for their semifinal playoff game. The defending national champion could lose to LSU and still make the four-team playoff. LSU wants to rebound from a 38-23 loss to Texas A&M in its regular-season finale. The Tigers are trying to become the first team to win an SEC championship game after losing three or more regular-season games since 2001, when LSU was 9-3 before beating Tennessee for the conference title. With a No. 14 CFP ranking, LSU would become the first SEC champion to not make the playoff.

LSU WR Malik Nabers vs. Georgia secondary: Nabers, a sophomore, had seven catches, matching his career high, in back-to-back games to close the regular season. Nabers had 198 receiving yards in that span and leads the Tigers with 58 receptions for 726 yards and a touchdown. Georgia's defense leads the nation with 11.33 points allowed per game. Defensive backs Kelee Ringo, Kamari Lassiter and Javon Bullard will lead the Bulldogs' pass defense against Nabers.

LSU: QB Jayden Daniels leads the team with 2,566 passing yards and 824 rushing yards — the second-most for a FBS quarterback. He was wearing a walking boot early this week after suffering a sprained ankle late in last week's loss to Texas A&M. If healthy, Daniels' dual-threat skills as a passer and runner are a major concern for Georgia's defense. Georgia's goal is to keep Daniels contained to the pocket, but the junior also is dangerous as a passer while throwing only two interceptions. LSU coach Brian Kelly said Daniels' injury is not a high ankle sprain.

Georgia: RB Kenny McIntosh had game-leading totals of 86 rushing yards and 91 receiving yards in last week's 37-14 win over Georgia Tech. McIntosh is the leader of a balanced running attack that finished the regular season strong. The Bulldogs ran for more than 200 yards in back-to-back games to gain momentum for the postseason. McIntosh leads the Bulldogs with 654 rushing yards and eight touchdowns and is third with 35 receptions for 437 yards and a score.