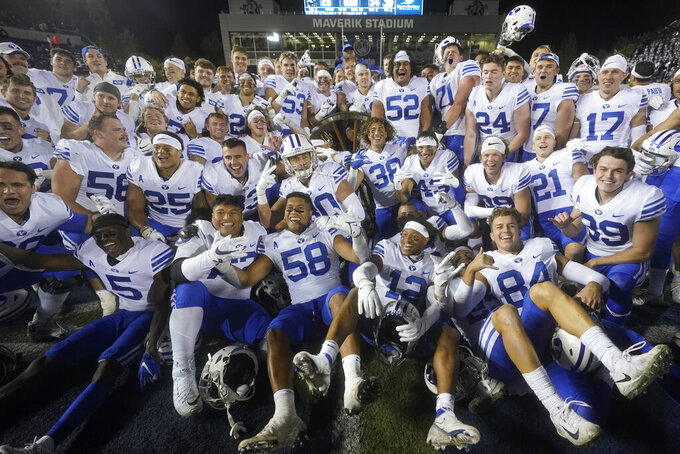 The BYU Cougars have a straightforward equation for success this season — never trail and ignore the hype.

That formula has produced a 5-0 start even as the 10th-ranked Cougars have gone through not one, not two but three QBs due to injuries.

BYU hosts Boise State (2-3) for homecoming Saturday with a chance to go 6-0 for just the sixth time in program history (the Cougars started 9-0 last season).

Part I of their winning formula: Not once this season have the Cougars faced a deficit. They're one of four teams this season that's yet to fall behind, joining top-ranked Alabama, No. 2 Georgia and No. 9 Michigan.

“If everybody thought that we would be this, we would've been ranked No. 10 in the preseason,” Sitake said. “There’s still a lot more opportunities for us to shock people. There’s still more for us to do. We’ve got to keep that edge.”

An earlier injury to starting QB Jaren Hall (ribs) hasn't derailed the Cougars. Neither did another injury to backup Baylor Romney (apparent concussion). It's opened the door for highly touted freshman Jacob Conover, who entered in the second half at Utah State last week and went 5 for 9 for 45 yards in the 34-20 win.

The Cougars face another rival in Boise State, which is off to an uncharacteristic 2-3 start. The Broncos fell 41-31 to Nevada last weekend at home.

Rarely does Boise State drop two in a row.

The last time the Broncos lost back-to-back games in a single season was 2016, when they fell to Air Force and then to Baylor in the Cactus Bowl.

First-year Broncos coach Andy Avalos sees plenty of encouraging signs, including a meeting with his team leaders this week.

“We could’ve been in there for five hours, talking ... their belief and where they want to go from here and how they want to finish this season,” Avalos said. “It makes you feel really grateful to be a part of something even during these tough times. Tough times don’t last. Tough people do."

BYU boasts a 14-2 mark under Sitake when the Cougars are ranked. The team climbed as high as No. 8 in the poll last season before winding up at No. 11.

“Honestly, I feel like all of our boys are dialed in,” BYU defensive lineman Atunaisa Mahe said. “We don’t really pay attention to that. We are just really looking forward to looking at each game week-by-week."

Boise State is looking for its first win over a top-10 opponent as an unranked team since beating No. 8 Fresno State on the road in 2001.

“Ultimately, what it comes down to week in and week out is focusing on us, and how we’re competing at practice, how we're maximizing our opportunities,” Avalos said. “So that when we get into these games we can be in character, we can be who we’re capable of being.”

The uncertainty at QB doesn’t faze Cougars tight end Isaac Rex, who has eight catches for 80 yards and three scores this season.

“I have faith in any one of those quarterbacks,” he said. “Whichever one’s healthy, I know they’re going to play great and we’ve got their backs.”

The two schools announced an extension to the series last season. The rivalry will take a break in ‘24 before it starts again at Boise in ’25 as part of a 10-year home-and-home agreement. But it could be complicated by BYU accepting an invitation to join the Big 12.

The Broncos hold a 7-4 lead in the series over the Cougars.

The Cougars are 18 of 19 in the red zone, with 14 TDs and four field goals. All part of their identity.

“We’re just a violent offense and we try to pound people,” Rex said. “If we get knocked down, we get right back up."