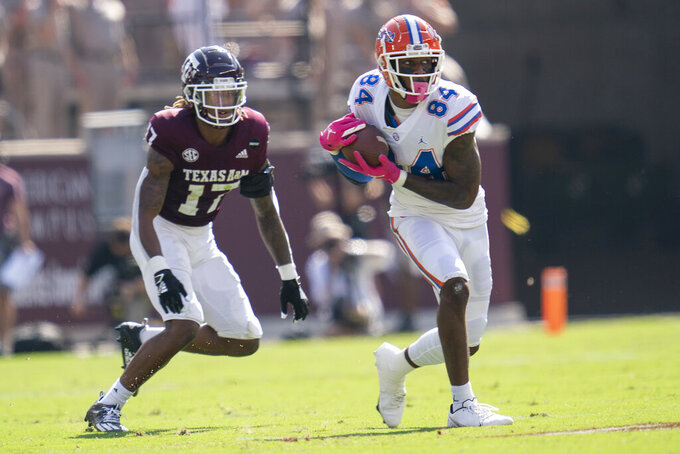 Florida returns to the field for the first time in three weeks after a COVID-19 outbreak. More than 30 players and coaches tested positive for the coronavirus — about 75 were quarantined — following a trip to Texas A&M. The SEC postponed two of Florida’s games. Now, the Gators are entering a seven-week SEC gauntlet, with the first two (Missouri and No. 5 Georgia) likely deciding their fate in the East Division.

Florida versus COVID. The Gators expect to be rested and rusty following a two-week layoff. They also could be without several starters because six players tested positive since the outbreak. More could be quarantined because of contact tracing, so it’s unclear who will be available.

Missouri: RB Larry Rountree III is coming off a 37-carry, 126-yard, two-touchdown performance against Kentucky. The Gators have had trouble stopping the run, but stout defensive tackle Kyree Campbell is expected to make his season debut Saturday and could help shore up the weakness.

Florida: TE Kyle Pitts is one of the best players in the country and should be ready to go after dealing with a left ankle injury last time out. Pitts finished with five catches for 47 yards and a touchdown — all season lows — in a 41-38 loss at Texas A&M. None off his receptions came in the final 10 minutes of the game.

Missouri has won two straight: a shootout against defending national champion LSU and a dominant defensive performance against Kentucky. … QB Connor Bazelak is 3-0 as a starter, completing 78% of his passes for 687 yards, four touchdowns and no interceptions. … Florida has won nine in a row in the Swamp. The team’s last home loss was a 38-17 drubbing against Missouri in 2018. … The Gators are 3-1 following a loss under coach Dan Mullen. … Florida’s 127 points are its most in any three-game stretch in SEC play since 2008, when it totaled 129 in win against Vanderbilt, South Carolina and Alabama.