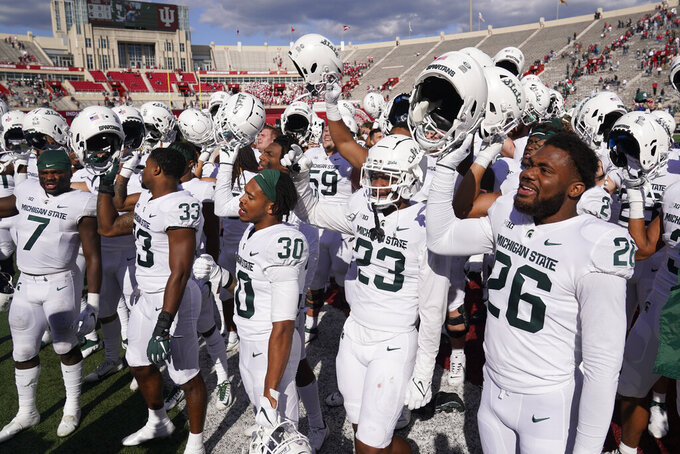 And just that quickly, the 10th-ranked Spartans were back on track. Matt Coghlin opened the second half with the go-ahead 51-yard field goal, Hunt's big plays gave Michigan State the breathing room it needed and the defense held on for a 20-15 victory.

“That was a heck of a play," coach Mel Tucker said of Hunt's throw and Thorne's tap-dance catch in traffic on the sideline. “Good play call, good execution, we were just trying to get a first down and keep the chains moving."

Kenneth Walker III, the nation's leading rusher, finished with 23 carries for 84 yards and the Spartans punted on all six first-half possessions.

But with Coghlin, Hunt and Thorne providing the second-half scoring punch, the Spartans (7-0, 4-0 Big Ten) survived a scare, reclaimed the Old Brass Spittoon and remained atop the East Division.

“Turnovers were huge for us, defense was playing hard and holding them to low numbers, the offense was really disciplined in the second half and that was why we were able to get it done," Tucker said.

Jack Tuttle started in place of injured quarterback Michael Penix Jr. and led Indiana to three first-half field goals but also threw an interception that Cal Haladay returned for a 30-yard TD — the Spartans first such score since the 2019 Pinstripe Bowl.

Tuttle also led the Hoosiers to their first TD against a conference opponent early in the fourth quarter — three plays after they had a scoring pass overturned by video review.

It's been that kind of season for Indiana, which has lost three of its last four.

“It continues to be the same issues — not finishing drives with touchdowns," coach Tom Allen said. “You give up a pick-six, which can’t happen. Protect the football. That’s what sticks out in my mind most. Dropped passes and you’ve got to make plays."

The first of Coghlin's field goals, a 51-yarder, gave Michigan State ta 10-9 lead. Hunt's touchdown, on his only catch of the game, made it 17-9. Indiana running back Stephen Carr's 1-yard scoring run cut the deficit to 17-15 early in the fourth quarter but the Spartans defense stopped Indiana's 2-point conversion attempt.

Coghlin sealed the win with a 49-yard field goal with 8:31 left.

Michigan State: Last week, the Spartans cracked the top 10 for the first time since September 2015. Saturday's victory may put them on the verge of matching their highest ranking (No. 8) in more than six years — just in time to take on rival No. 8 Michigan in two weeks.

Indiana: Maybe coach Tom Allen belongs on the CFP selection committee after a brutal first half schedule. The hard-luck Hoosiers have now lost road games to No. 2 Iowa and No. 7 Penn State and home games against No. 3 Cincinnati and the Spartans.

Michigan State: Coghlin’s first field goal matched the longest of his career, a 51-yarder last season against the Wolverines. ... Thorne was 14 of 26 for 126 yards, one TD and two interceptions. ... Walker now has 997 yards rushing this season.

Indiana: The Hoosiers ran nearly twice as many plays and held the ball for 19 1/2 minutes in the first half but only led 9-7. ... Charles Campbell made field goals from 24, 44 and 25 yards. ... Tuttle was 28 of 52 with 188 yards and two interceptions. ... Indiana has had three interceptions returned for touchdowns in Big Ten play this season.

Penix Jr. missed the game with a separated AC joint in his throwing shoulder and all-conference cornerback Tiawan Mullen missed his second straight game with a leg injury. Linebacker Micah McFadden finished with nine tackles despite playing a cast on his broken left thumb. McFadden had surgery last week.

Michigan State: Has an open date before facing the Wolverines at home on Oct. 30.