No. 11 UCF focused on Navy, not playoff picture 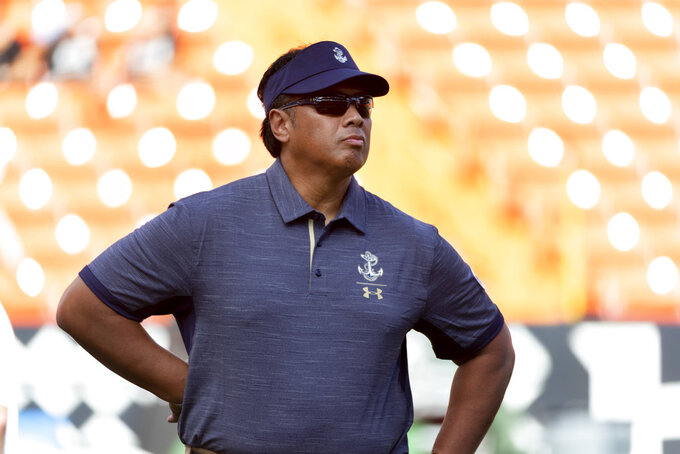 File-This Sept. 1, 2018, file photo shows Navy head coach Ken Niumatalolo looking on as his team warms up before an NCAA college football game in Honolulu. Navy has one of the most productive running attacks in the nation, ranking third behind Georgia Teach and Army at 286.9 yards per game. The bad news is the Midshipmen are coming off being held to a season-low 124 yards on the ground in the 42-0 loss to Cincinnati. “We've never been beat like that,'' Niumatalolo said. (AP Photo/Eugene Tanner, File)

ORLANDO, Fla. (AP) — No. 11 UCF, heavily favored to beat Navy to remain unbeaten and extend the nation's longest winning streak to 22 games, insists the Knights aren't paying attention to chatter about their chances of winding up in the College Football Playoff.

"We talk about it every day. ... Outside noise has no impact on what we are," coach Josh Heupel reiterated.

"We're only as good as our next performance. Saturday 12 o'clock vs. Navy is a huge test. I think our kids are excited about that. ... So let's focus on that," Heupel added. "However the season unfolds, I still believe if we go out and handle our business, things will shake out the way they're supposed to."

The Knights (8-0, 5-0) dropped two spots in this week's Associated Press Top 25, even though they beat Temple 52-40 to extend their winning streak to an American Athletic Conference-record 21 consecutive games.

UCF remained No. 12 in the latest CFP rankings, despite yielding 670 yards defensively and needing McKenzie Milton to rally the Knights from a halftime deficit to take sole possession of first place in the AAC East Division.

Milton, returning from missing one game with an undisclosed injury, threw for 312 yards and three touchdowns while also rushing for a TD.

"He is a guy that is a fierce competitor. He's battled through a lot of things this year, most of it unknown by the media until he wasn't able to go out and play," Heupel added, "He's a tough kid. I appreciate the heck out of him for that."

Navy (2-7, 1-4) has lost six straight and is coming off a 42-0 loss at Cincinnati, which re-joined UCF this week as the only AAC teams in the Top 25. The once-beaten, 25th-ranked Bearcats travel to Florida to face the Knights next Saturday.

"It's going to be another tall order for us," Navy coach Ken Niumatalolo said.

The Midshipmen are finishing a three-week stretch in which they will have played No. 3 Notre Dame, Cincinnati and UCF, who are a combined 25-1.

"It's uncharted waters for us," said Niumatalolo, who's taken Navy to bowl games nine of the past 11 seasons. "It obviously gets tougher every week."

Some other things to know about the Knights and Midshipmen, who are meeting for only the second time:

UCF ranks third nationally in total offense, averaging 548.8 yards and 45.4 points per game. The Knights have scored at least 30 points in 21 consecutive games, the longest such streak in the country.

Milton, eighth in Heisman Trophy balloting a year ago, has thrown for 2,109 yards, 19 touchdowns and just five interceptions. Greg McCrae is coming off rushing for 188 yards and one TD against Temple.

"They're pretty much unstoppable on offense," said Niumatalolo, whose defense is allowing 441.4 yards and 36.2 points per game.

Navy has one of the most productive running attacks in the nation, ranking third behind Georgia Teach and Army at 286.9 yards per game. The bad news is the Midshipmen are coming off being held to a season-low 124 yards on the ground in the loss to Cincinnati.

Heupel said preparing to face a triple option scheme is a challenge, noting it's difficult to simulate Navy's offense in practice.

"It's tough because it's completely different than what we do offensively," the UCF coach said. "All our kids over there giving the looks have got to do a great job of buying into being different ... and understand the importance of the speed, the tempo, the looks that they're going to play with, whether it's their motions from their backs or whatever it might be."

UCF is one of four undefeated remaining in the FBS, along with Alabama, Clemson and Notre Dame — the top three teams in the AP and CFP rankings.