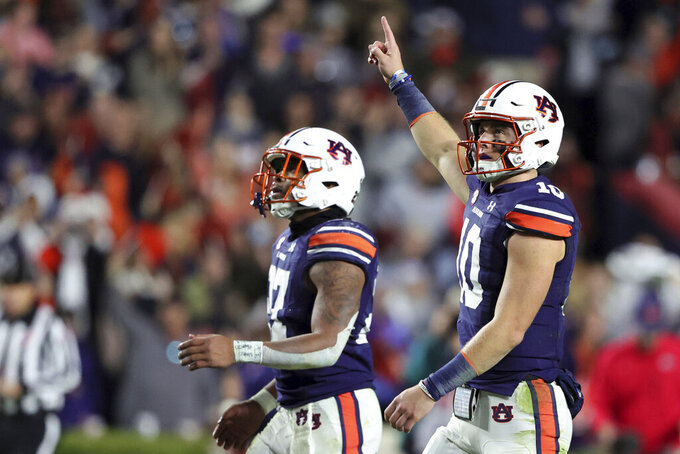 Auburn quarterback Bo Nix (10) celebrates as he walks off the field after Auburn defeated Mississippi 31-20 in an NCAA college football game Saturday, Oct. 30, 2021 in Auburn, Ala. (AP Photo/Butch Dill)

Bo Nix has turned around his — and perhaps Auburn’s — season since watching from the sideline as his backup helped prevent an embarrassing upset.

The Tigers’ once-struggling quarterback has turned in perhaps the best stretch of his career for the 12th-ranked Tigers since getting benched in that Georgia State game.

Nix began to stage his turnaround the next week against LSU.

“Since the LSU game, I’ve just gotten my confidence back — kind of just an edge to me that I’ve always been able to play with,” Nix said after Saturday night’s win over No. 15 Mississippi. “The past few games, I’ve just played with that mindset: cut it loose, you’ve got nothing to lose, you don’t know what else is going to happen, tomorrow’s not promised.

“So just go out there and cut it loose and have some fun.”

The Tigers ride that hot streak into Saturday’s game at No. 13 Texas A&M.

Nix has completed 77% of his passes the past two games for 568 yards against Top 25 SEC West opponents, with three touchdowns both passing and rushing. He also helped deliver Auburn’s first win at LSU since 1999 with a highlight-reel fourth-down play a week after the T.J. Finley-led comeback had sparked speculation that Nix might have lost his starting job.

Nix kept it and has helped put Auburn in contention for the Southeastern Conference Western Division title in coach Bryan Harsin's debut season.

Nix took off after a solid performance against No. 1 Georgia’s nation's leading defense. The three-year starter and former five-star prospect has been maligned at times during his career for inconsistency as a passer and decision-making when he's under pressure.

Nix has been thriving under coach Bryan Harsin and the quarterback’s third offensive coordinator, Mike Bobo, since that Georgia State game.

“I think it’s the best football” he’s played, Auburn offensive lineman Brandon Council said. “And I think that happens when the O-line actually comes together and we give him the time he needs. And we just go out there for him.

“He’s able to make stuff happen when he has time.”

Nix, who has started every game since the opener as a freshman, wasn't showing signs of substantial progress early in the season. After a loss at Penn State, he was benched late in the third quarter against Georgia State.

Then Finley, an LSU transfer, led Auburn on a 98-yard drive capped by his go-ahead touchdown pass to Shedrick Jackson with 45 seconds left. Harsin stuck wtih Nix as his starter, and it has paid off.

Nix passed for 255 yards and ran for 74 the next week in Baton Rouge. That performance was highlighted by his 24-yard fourth-down touchdown pass to tight end Tyler Fromm on the run after dodging LSU defenders and reversing direction under a heavy rush.

Nix is completing a career-high 62.2% of his passes for 1,764 yards and nine touchdowns against two interceptions. He has also run for 189 yards and four scores.

Harsin said Nix's consistency in practice and his supporting cast have both improved.

“It’s just his maturity, his play in the game," Harsin said. “He’s been in this offense now and is figuring out how it’s going to look at times. That just takes time. But his effort, everything else you want from a player, has always been there.”