No. 13 Minnesota looks to seal up Big Ten West 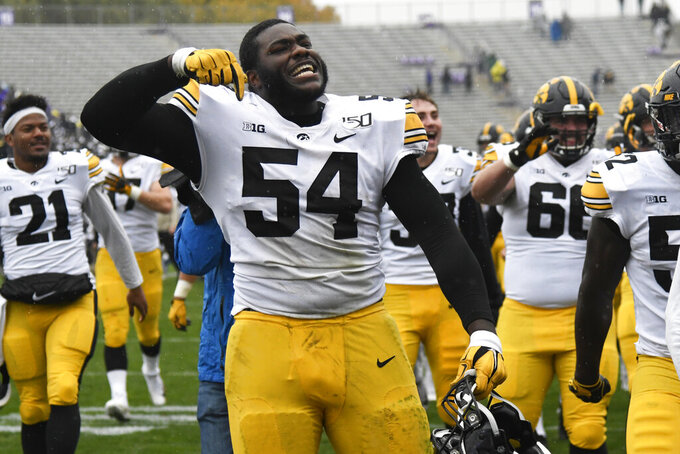 Minnesota was supposed to be an afterthought in the Big Ten West race.

But the surging Gophers might all but wrap up the division by Saturday night.

Meanwhile, No. 18 Iowa (6-2, 3-2) travels to No. 16 Wisconsin (6-2, 3-2) in a battle of two preseason West favorites that are instead tied for second behind the Gophers. The losing team can essentially kiss its chances in the division goodbye, while the winner would still likely need to beat Minnesota to make it to Indianapolis.

Either way, the Gophers have already done enough to earn coach P.J. Fleck a seven-year contract extension, which was announced earlier this week.

"I couldn't ask for a better group of young men," Fleck said. "They were huge in this decision. I love coaching them every single day. This is a very fun team, it's a very fun culture, very different."

So much of the focus on Minnesota has been its soft schedule to date, and the College Football Playoff committee took notice of that when it ranked the Gophers 17th in its initial standings.

Penn State, which owns the same overall and conference record as Minnesota, was fourth in the eyes of the CFP.

Minnesota has caught fire in recent weeks. After needing double-overtime to win at Fresno State and squeaking by Purdue 38-31, the Gophers have been rolling. Minnesota's last three wins, over Nebraska, Rutgers and Maryland, came by an average margin of victory of 30 points.

Penn State is a much stiffer test. The Nittany Lions have already beaten the Hawkeyes and Michigan, and are 6.5-point favorites — even though the game is in Minneapolis.

"I think any win you have at this point, no matter who it is against, it's significant," Fleck said. "You're talking about your final four games. We know we're playing ranked teams as we continue to go ... (and) I tell our players internally they have to think they're ranked (No.) 1 with everything we do. We want to do our best, everything at an elite, championship level. Sooner or later you get to that point."

The matchup between Iowa and Wisconsin features two of the best defenses in the country.

The Badgers shut out four of their first six opponents before a stunning 24-23 loss at Illinois. Ohio State pummeled Wisconsin 38-7 the following week, knocking the Badgers out of the national title picture and handing them perhaps a fatal blow in the West.

Iowa, like Wisconsin, is coming off a much-needed bye week. The Hawkeyes have a pair of shutouts to their credit, including a 20-0 blanking at Northwestern on Oct. 26, and they rank third nationally in scoring defense at 10.1 points a game.

If Penn State can hand the Gophers their first loss, the winner of Saturday's game in Madison will control their own fate because they each still have Minnesota left to play.

"November football is always significant, and it's good to be in a position where the games mean a lot," Iowa coach Kirk Ferentz said.