No. 13 Utah big favorite on road against reeling Arizona St 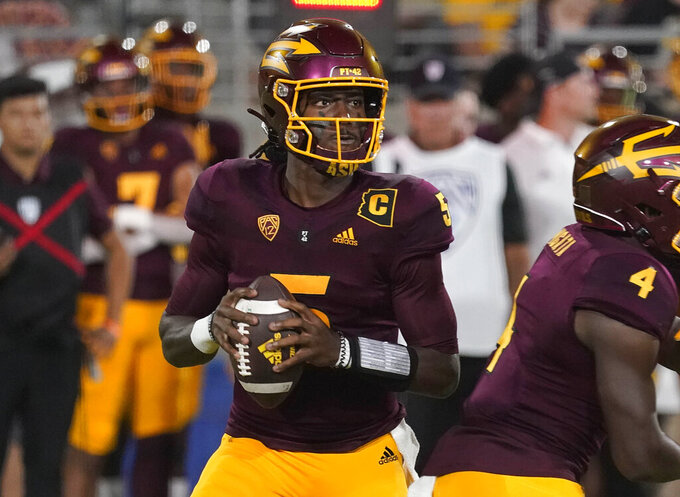 TEMPE, Ariz. (AP) — Arizona State would have a tough task beating No. 13 Utah this weekend even in ideal circumstances. Nothing about the past week has been ideal.

The Sun Devils will play their first game with interim coach Shaun Aguano in charge when they host the Utes on Saturday night. The school fired coach Herm Edwards on Sunday after the team's embarrassing 30-21 loss to Eastern Michigan.

Aguano called the opportunity to lead the Sun Devils a “dream” even though he considers Edwards a good friend. Now it's his job to help the Sun Devils (1-2) salvage a season that's quickly gone south, starting with the their Pac-12 opener on Saturday.

“Our kids and coaches have been through a lot in the last 24 hours,” Aguano said earlier this week. “My focus is the next nine conference games. How do I inspire these guys to play fast, physical football?"

The Sun Devils will face a Utah team that has bounced back from a season-opening loss to Florida with consecutive lopsided wins against Southern Utah and San Diego State. The Utes (2-1) are still considered one of the favorites to win the Pac-12 title, even after losing to the Gators.

Utah enters the game as a two-touchdown road favorite. Cameron Rising has completed 67% of his passes for 694 yards, eight touchdowns and just one interceptions. The Utes are also averaging 216.5 yards on the ground per game, which leads the Pac-12.

Even though just everything about Saturday's game seems to favor Utah, veteran coach Kyle Whittingham remains wary of the Sun Devils.

“Arizona State has a lot of good players and when you look at film there isn’t a shortage of talent,” Whittingham said. “They had a tough game on Saturday night, but they have some guys.”

Later he added: “It's like a wounded animal. It's dangerous. ... You take it for granted, they'll beat you, I promise you that."

The Utes are just 4-7 in conference openers since joining the Pac-12.

Arizona State quarterback Emory Jones has played fairly well in his first three games since transferring from Florida during the offseason.

The 6-foot-3, 210-pounder has thrown for 557 yards, two touchdowns and no interceptions while also running for three touchdowns. He also has some playmakers around him: Xazavian Valladay ran for 127 yards and a touchdown against Eastern Michigan while Elijhah Badger caught seven passes for 88 yards.

It's been a tough couple weeks for Utah running back Tavion Thomas, who Whittingham said is still grieving the death of a close family member.

Thomas ran for more than 1,100 yards last season and 21 touchdowns. He's had a slightly slower start this year with 222 yards rushing and four touchdowns. He's averaging 4.4 yards per carry.

Arizona State linebacker Kyle Soelle had a whopping 18 tackles against Eastern Michigan. He has 39 tackles this season, which ranks fourth in the nation.

Whittingham said he was very pleased with the play of Utah's defensive line during the team's 35-7 win over San Diego State last weekend. The Utes allowed just 173 total yards in the victory.

“The defensive tackles have made an impact. Junior Tafuna has really come back in his own," Whittingham said. “He started the season off a little slow but he is now playing with a great deal of confidence and explosiveness. If you watch the tape and focus on him, he’s dominant.”

Aguano was born and raised in Kapaa, Hawaii, but eventually became one of the most decorated high school coaches in Arizona history, leading Chandler High to four state 6A titles.

Aguano joined Edwards’ staff in 2019, helping turn the Sun Devils into one of the nation’s top rushing teams.