No. 14 Baylor first to play TCU since Patterson's departure 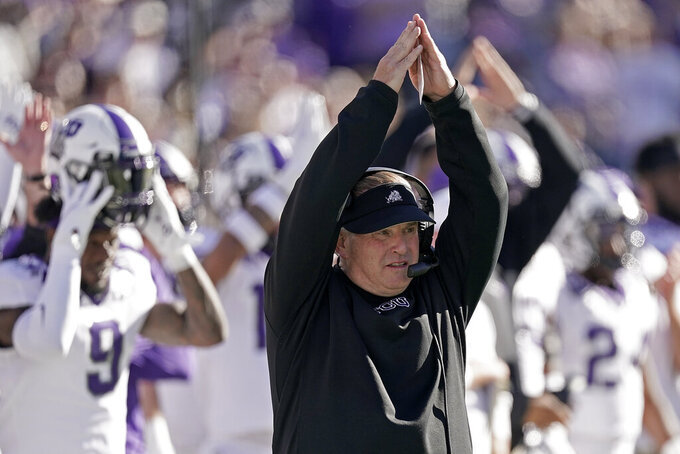 TCU head coach Gary Patterson motions to his players during the first half of an NCAA college football game against Kansas State, Saturday, Oct. 30, 2021, in Manhattan, Kan. (AP Photo/Charlie Riedel)

FORT WORTH, Texas (AP) — Dave Aranda remembers being a broke young coach watching bootleg tapes of Gary Patterson to learn how he taught and ran his defenses.

When Aranda and 14th-ranked Baylor play Saturday at TCU, it will be the first time since 1997 that Patterson won't be on the sideline during a Horned Frogs game.

“My heart breaks for him,” said Aranda, in his second season as Baylor’s head coach after winning a national title as defensive coordinator at LSU. “A lot of memories of learning ball and learning teaching methods, and what to do and what not to do. So it’s a sad day as a coach. You never want to see it, but you know it’s a part of it.”

Patterson won't finish his 21st season as TCU's head coach after he and the school mutually agreed last Sunday to part ways. The move came after the Horned Frogs (3-5, 1-4 Big 12) had their third consecutive loss by at least 12 points.

Aranda was a linebackers coach at Cal Lutheran in his first college coaching job when Patterson first got to TCU as defensive coordinator in 1998.

While TCU has five losses in its last six games, Baylor (7-1, 4-1) has one of the Big 12's top defenses and is making a push for its second conference championship game appearance in three seasons.

The Bears finished October with three wins in a row at home after a 24-14 loss at No. 11 Oklahoma State, and are tied with the Cowboys for second in the Big 12 standings. Fourth-ranked and six-time defending Big 12 champion Oklahoma (9-0, 6-0) visits Waco on Nov. 13.

Trestan Ebner, the do-everything back who is third in the league with 137 all-purpose yards game, said the key to the Bears' turnaround this season has been believing in Aranda, and how they came together last offseason after going 2-7 in the coach's pandemic-altered debut season.

"We felt like last year was lot of offense versus defense and defense versus offense, instead of us being a team,” Ebner said. “Then our focus was working together as a team. I think that just shows how we play together this year and we play complementary football, is just a testament to the time we spent together. ... We’re just more of a team.”

Former Minnesota coach Jerry Kill will be TCU's interim coach for the rest of the season. He was the best man at Patterson’s wedding and on his staff since February 2020 in an off-field role as a special assistant in charge of the offense.

“I've known Gary for 38 years. So there’s a lot of, you know, emotion built up in that,” Kill said. “This is the house that Gary built.”

Kill hasn't been in an on-field role since the 2017 season as offensive coordinator at Rutgers. He was 29-29 with the Golden Gophers from 2011-15 before seizures caused by his epilepsy forced him to step down.

TCU quarterback Max Duggan has been playing with a fractured bone in his foot since getting hurt in the Texas Tech game Oct. 9. Kill said the injury for Duggan has "started to take its toll on him, there’s no question about that. But don’t rule him out or anything because we could’ve done that last week.”

Duggan was sacked four times last week in a 31-12 loss at Kansas State before backup Chandler Morris took over early after halftime.

This is the 117th meeting in a series that dates to 1899, when both schools were located in Waco. It is the most-played series for both schools. ... Baylor has committed only one penalty over its last two games. ... With Patterson gone, long-time defensive coordinator and linebackers coach Chad Glasgow will call the defensive plays for TCU.