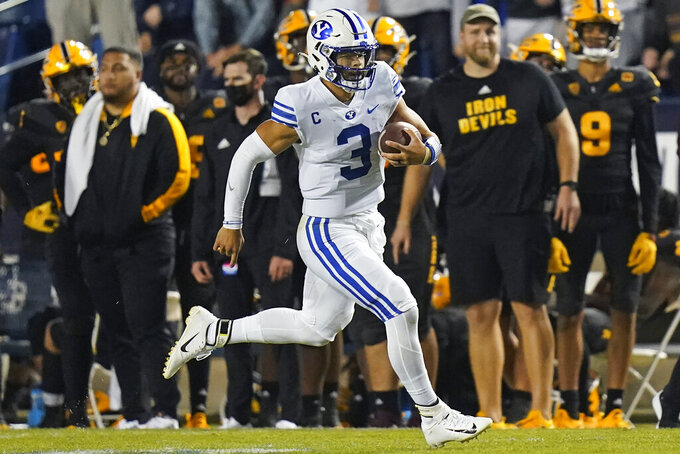 Hours before that moment, a little dress rehearsal for chaos and noise — LaVell Edwards Stadium as the Bulls make a rare trip out West to face No. 15 BYU on Saturday night.

“This is a business trip. It’s not a vacation,” said Scott, whose program will be making its second-ever trip to the state of Utah. The Bulls lost to the Utah Utes in 2001. “Yes, it’s something you’ll remember for a long time. But we need to to be able to keep our focus.”

To prepare for BYU's boisterous crowd, the Bulls (1-2) have turned up the noise at practice. The Bulls are also going out a day early to acclimatize and plan to pay a visit to the stadium, just so they're a little more familiar with the surroundings.

Immediately after the game, it's back home, where the team hopes arrive by about 9:30 a.m. Florida time. A few hours of sleep for Scott later and it's off to his daughter's birthday celebration.

An action-packed two-day stretch for sure. A potentially program-defining game under the second-year South Florida coach, too.

“That’s why we talked a lot about grit, mental toughness and adversity and all these things,” said Scott, who arrived at South Florida from Clemson and went 1-8 last season. “We need all this we can get. You don’t get better by having it easy.”

The stadium isn't the easiest of places to visit. The Cougars (3-0) have won 12 straight at LaVell Edwards Stadium, which is the fifth-longest streak in school history.

South Florida certainly has BYU's attention, too, courtesy of the Bulls' 27-23 win in 2019 at Raymond James Stadium in Tampa, Florida. Since that loss, the Cougars have gone 19-3, including 11-1 last season.

“I see young men and their coaches really buying into what we do,” BYU coach Kalani Sitake said. “Right now our focus is week-to-week and on USF. But it’s been really cool to see what has happened over the past few years.”

Quarterback Jaren Hall made his first start in that USF game two years ago. Since then, he's dealt with injuries, took a medical redshirt last season and now he's back in the starter's role. He's led the Cougars to three straight wins against Pac-12 teams. Although, Hall did apparently have the wind knocked out of him in a win over Arizona State last weekend.

Hall should be ready to go, according to Sitake.

“How come no one’s talking about the O-linemen and how sore they are?” Sitake cracked. “Everybody’s sore.”

This play may just illustrate the tenacity of the BYU: Hall threw a third-quarter interception that Sun Devils linebacker Merlin Robertson returned down the sideline before Tyler Allgeier chopped the ball free from behind. A hustling Hall recovered the fumble.

“That play describes the way that we are,” tight end Dallin Holker said. “It shows how badly we want to win.”

South Florida will be chasing after its first win over a ranked team since beating No. 22 Navy on Oct. 28, 2016. The Bulls have 11 wins over teams ranked in the AP Top 25.

BYU will be going for its 250th win at the stadium constructed in 1964 and then named Cougar Stadium. It was renamed LaVell Edwards Stadium before the last home game in 2000. Since the renaming, the Cougars are 94-31 at home.

BYU punter Ryan Rehkow boomed a BYU-record 83-yard punt against Arizona State. Under the right conditions, Rehkow thinks he can launch one even farther.

He’s currently fourth in the nation in punting with a 51.4-yard average.

The 6-foot-6, 232-pound Rehkow also was a field-goal kicker in high school. He still keeps that skill set sharp, too, just in case.

“I realized I had more of a punter’s body over a kicker’s body,” Rehkow said. “My ceiling is a lot higher as a punter.”