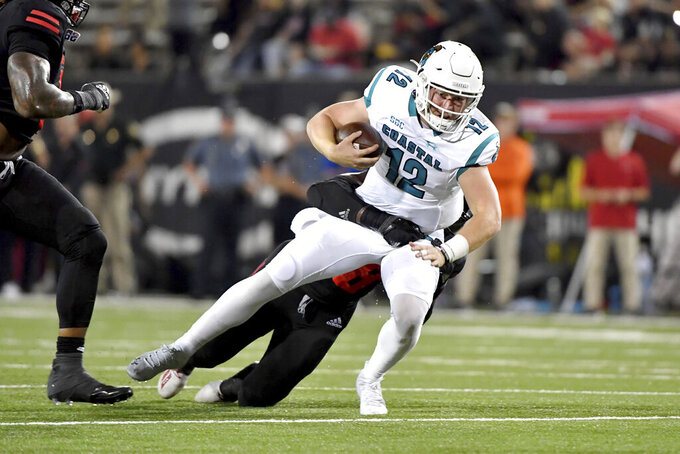 Coastal Carolina quarterback Bryce Carpenter (12) is tackled by an Arkansas State defender after a run during the first half of an NCAA college football game Thursday, Oct. 7, 2021, in Jonesboro, Ark. (AP Photo/Michael Woods)

McCall completed 18 of 23 passes for a career-high 365 yards and four touchdowns without an interception.

Isaiah Likely also had a big night, catching eight passes for 232 yards and four touchdowns — all career highs — and kicking the game off with the school-record 99-yarder.

He became the first tight end in Sun Belt Conference history with four touchdown catches in a game.

“I thought we played really well the first half and clamped them down,” Chanticleers coach Jamey Chadwell said.

The Chanticleers forced a punt on Arkansas State's game-opening drive and took over on the 1. A run up the middle went nowhere and on second down, McCall, standing in the middle of the end zone, lofted a pass to tight end Likely, who made the catch in stride just past the 20 and raced downfield untouched for the score.

“That was a great way to start,” Chadwell said.

Shermari Jones, back after missing two games to injury, rushed for 113 yards on 10 carries and dragged a defender into the end zone on a touchdown run from the 8.

“We've got to stop the run, we emphasized that all week,” Coastal Carolina defensive tackle C.J. Brewer said. “We want to make them one-dimensional and held them to 18 yards rushing.”

Layne Hatcher came into the game after halftime and led two Arkansas State scoring drives in the third quarter — posting 145 yards of offense in the quarter after the Red Wolves gained 51 in the first half. Hatcher finished 13-of-29 passing for 185 yards with two TDs and a late interception.

Te'Vailance Hunt had a 63-yard scoring reception and led the Red Wolves with six catches for 138 yards.

Coastal Carolina: The Chanticleers are 2-3 versus Arkansas State, earning their first win in Jonesboro. ... The Chanticleers entered Thursday's game allowing 286.6 yards per game, 16th-best in the nation. ... The defense held Arkansas State to minus-19 yards rushing in the first half, thanks in large part to three sacks, and ended with 18 yards rushing allowed ... Likely's four TD catches were the most in a game since Matt Hazel had three TD catches in 2010.

Arkansas State: Starting quarterback James Blackman, a transfer from Florida State, was in street clothes on the sideline when the teams came back for the second half. Blackman was 7-for-12 passing for 70 yards and was sacked three times for a loss of 35 yards. ... The Red Wolves subbed in Hatcher after halftime and the Little Rock native — who passed for 4,611 yards and 42 touchdowns in the 2019 and 2020 seasons — ended a Coastal Carolina streak of not allowing a passing touchdown this season.

Arkansas State cornerback Samy Johnson was taken from the field by ambulance in the third quarter.