No. 15 Tar Heels, Virginia to meet at Scott Stadium 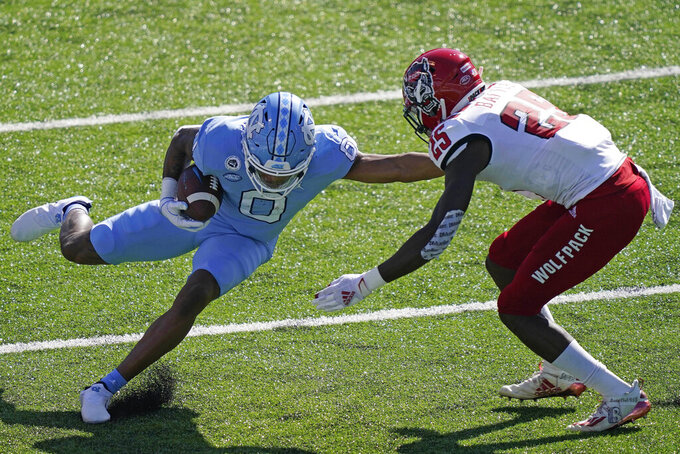 Continued winning could put the Tar Heels in position to challenge No. 1 Clemson for the top spot in the ACC. Virginia just wants to get off its four-game losing streak.

UNC’s Michael Carter and Javonte Williams against Virginia's run defense. Carter and Williams are the only teammates in the country each averaging 100 yards rushing among teams that have played multiple games, with Carter ranking 11th in the FBS ranks (116.8) and Williams ranked 14th (112.4). The Cavaliers are fifth in the league in rushing defense, allowing just 133.6 yards per game.

UNC: WR Emery Simmons. The Tar Heels didn’t have WR Beau Corrales in last week’s win against North Carolina State due to injury. Simmons made his first career start and had five catches for 38 yards. He could get more work behind Dyami Brown and Dazz Newsome if Corrales is unavailable again.

Virginia: QB Brennan Armstrong. The lefthanded sophomore quarterback missed a game and a half in the concussion protocol, but not only gives the Cavaliers a deep-throwing threat, but also a third down option to lower his head and plow for essential first downs.

The Tar Heels haven’t beaten the Cavaliers since 2016. … UNC coach Mack Brown is 3-8 against Virginia. ... All seven losses for UNC dating to the start of last season have come by seven or fewer points. … The Tar Heels allowed just 34 yards rushing in the N.C. State win, their lowest total since 2011. ... Virginia has been outscored 55-10 in the fist quarter and hasn't scored first in any game this season. ... The Cavaliers have three touchdown drives of 94 or more yards this year after not having any in the past three seasons.