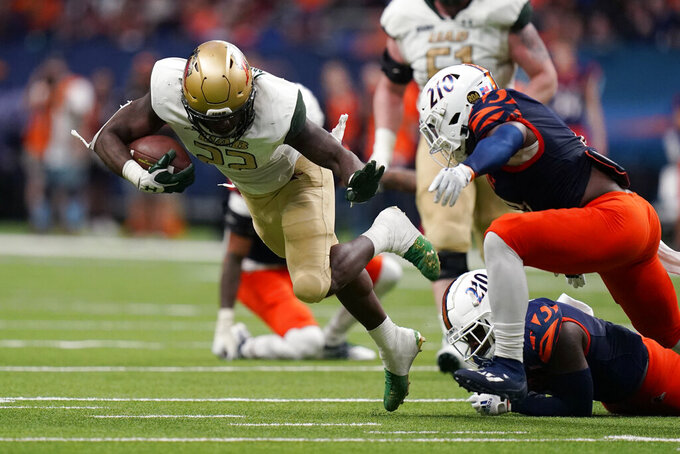 UAB running back DeWayne McBride (22) is tripped up on a run during the first half of an NCAA college football game against UTSA , Saturday, Nov. 20, 2021, in San Antonio. (AP Photo/Eric Gay)

SAN ANTONIO (AP) — UTSA has practiced every possible scenario, even the most improbable, during its historic season and that prepared the Roadrunners for the most unlikely of finishes. Sort of.

Frank Harris scooped up a low snap and threw a 1-yard touchdown pass to Oscar Cardenas with three seconds left, giving No. 15 UTSA a wild 34-31 victory over UAB on Saturday at the Alamodome.

Harris said the Roadrunners practice every aspect of that last play weekly, except for the bad snap.

“I already got on (center Ahofitu) Maka for the snap was low,” Harris said, laughing. “That kind of threw the play off from jump street. I was rolling out to just try and figure out something, and Oscar was still open. I just threw it, it got tipped and he concentrated well and caught it. That was the play of the game.”

“I swore I wasn’t going to get emotional, but it means a lot,” Roadrunners coach Jeff Traylor said. “It really does.”

UTSA, No. 22 in the College Football Playoff rankings, will host the C-USA championship on Dec. 3.

Trailing much of the game, the Roadrunners got the ball back with 1:09 left after stuffing the Blazers a yard short of a first down on third-and-4 at the UAB 42.

Inches short of a first down, Blazers coach Bill Clark opted to punt the ball prior to his team drawing a delay-of-game penalty to make it fourth-and-6.

“Lord, I wanted to go for it,” Bill Clark said. “I just didn’t know how to live with myself, giving them the ball, if we just somehow, something happened. The ball went through his hands (or) he slipped. I mean, I’ve done that before. Maybe probably not that far back. With one minute left, I mean making them go 70-80 yards, I just, I’d do that 100 out of 100 times.”

Harris drove UTSA 77 yards on seven plays. The winning touchdown came after Harris fumbled the snap and had his pass tipped by linebacker Noah Wilder before Cardenas caught it in the back of the end zone.

“Frank did one of his little goofy, shovel passes right over the top of him, and they tipped it twice and it bounced off the goalpost, off the trombone and back to Oscar,” Traylor said, chuckling. “That’s the way I remember it.”

Cardenas said the tipped ball was not unexpected since UTSA has made him practice catching those types of deflections each week during practice. Still, in the moment Cardenas said, the ball “got huge.”

Harris completed 25 of 35 passes for 323 yards and three touchdowns. The senior set the school single-season record with 21 touchdown passes on his first TD Saturday.

Dylan Hopkins passed for 254 yards and two touchdowns and DeWayne McBride rushed for 144 yards and a touchdown on 24 carries for UAB.

The Roadrunners took their first lead late in the third quarter on Hunter Duplessis’ 49-yard field goal to go up 27-24. Duplessis had a 51-yarder earlier.

UTSA had a season-high 35,147 in attendance at the Alamodome, and the crowd had an impact as it did last week against Southern Miss. UAB had three false starts, two delay-of-game penalties and had to call its final timeout with 5:25 left in the game to avoid a penalty.

The Blazers made good use of that final timeout, scoring on the ensuing play on a 16-yard run by McBride in taking a 31-27 lead.

After being stuffed for no gain on the opening play of the game, UAB silenced the crowd with a 74-yard touchdown on second down. Hopkins stood in the pocket untouched and waited for Trea Shropshire to break free for a touchdown.

UTSA: The Roadrunners will play for their first C-USA title regardless of next week’s outcome against North Texas. UTSA has an opportunity to go undefeated during the regular season for the first time in program history, though.

UAB: The Blazers had an opportunity to capture their fourth straight West division title but fell inches short of that goal. UAB will close the regular season out and wait for a bowl invitation.