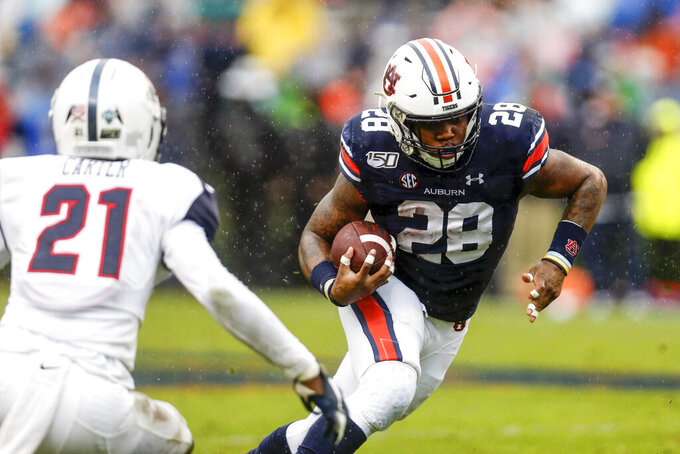 Auburn running back JaTarvious Whitlow (28) carries the ball as he tries to get past Samford defensive back Joshua Carter (21) during the first half of an NCAA college football game, Saturday, Nov. 23, 2019, in Auburn, Ala. (AP Photo/Butch Dill)

AUBURN, Ala. (AP) — Auburn held Samford to 114 yards and forced four turnovers, JaTarvious Whitlow scored twice, and the No. 16 Tigers tuned up for the Iron Bowl with a 52-0 victory Saturday at rain-drenched Jordan-Hare Stadium.

Auburn (8-3) forced and recovered a fumble on a fourth-and-4 on Samford’s opening drive, the first of three turnovers and a trio of three-and-outs across Samford’s first six possessions.

For the game, the Tigers also had 13 tackles for loss and held Samford (5-7) to 2 yards per play, 2 of 13 on third down as Auburn’s defensive starters were benched a few minutes into the third quarter.

Samford had scored in 213 straight games.

"I think if they are in any other division they’re probably in the top five," Samford head coach Chris Hatcher said. "That defensive front they have is phenomenal. They’ve got a great quarterback and some great skill players to go along with him. All in all, we just played a team that was a lot better than us."

As the rain increased, so, too, did Auburn’s offensive production. After a seven-point first quarter in which they struggled to convert third downs and had a 43-yard field goal blocked, the Tigers had 193 yards of offense and 24 points in the second.

Whitlow and D.J. Williams accounted for 130 yards from scrimmage in the first half and Williams added his second touchdown of the season in the third quarter.

The Tigers nearly eclipsed 300 rushing yards for the second time this season, finishing with 294 and four rushing scores.

After completing 15 of 23 passes for 150 yards and a score, Bo Nix’s day also was done early in the third quarter.

Sandberg made the most of his first appearance of the year, accounting for 115 yards from scrimmage and throwing the first two TD passes of his Auburn career - both to junior college transfer Zach Farrar.

With a 10-yard touchdown pass to Harold Joiner in the second quarter that put Auburn up 21-0, Nix passed Stan White for the most completions (181) and tied him for the most touchdowns (14) by a freshman quarterback in program history. Nix needs 50 passing yards and a touchdown in Auburn’s final two games to break White’s single-season marks from 1990 in both categories.

Auburn sophomore kicker Anders Carlson had a 43-yard field goal blocked in the first quarter. The younger brother of SEC all-time leading scorer Daniel Carlson is now 9 for 25 on kicks of more than 40 yards in his Auburn career.

Auburn is facing uncertainty at two key positions heading into the 83rd Iron Bowl. Reserve safety Jamien Sherwood, who has 25 tackles, three pass breakups, four tackles for loss and two quarterback hurries over the past five games will miss the first half against the Crimson Tide after being ejected for targeting in the third quarter against Samford.

Additionally, Auburn started Kaleb Kim, who lost his starting job at center three weeks ago, at right guard over Mike Horton, the usual first-teamer at that spot. However, when Kim was injured in the second quarter, freshman Jalil Irvin filled in for him instead of Horton.

Auburn coach Gus Malzahn said postgame that Horton suffered a minor injury last week and is expected to be "fine" to start against Alabama.

Samford’s regular season ends at 5-7. It's not expected to make the FCS playoff field.

Auburn hosts Alabama in the Iron Bowl next Saturday. The Tigers are looking to win their third of the last four matchups played in Jordan-Hare Stadium.

"We've got the Iron Bowl at home," Malzahn said. "That's as good as it gets."