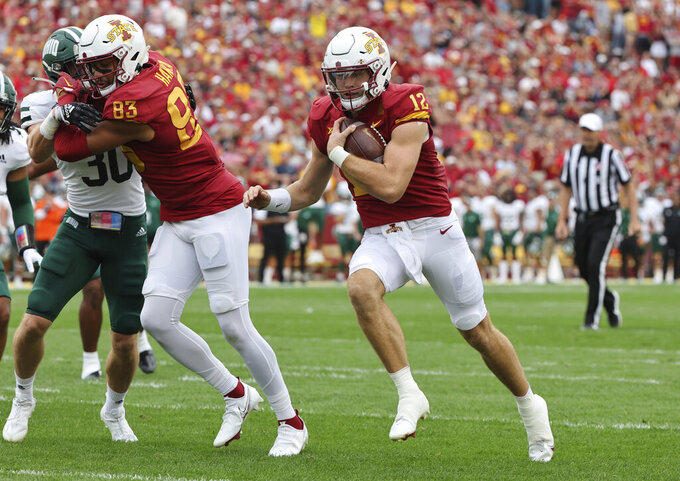 Iowa State quarterback Hunter Dekkers (12) runs for a touchdown during the first half of an NCAA college football game against Ohio, Saturday, Sept. 17, 2022, in Ames, Iowa. (AP Photo/Justin Hayworth)

Baylor heads into its Big 12 opener at Iowa State on Saturday planning to draw on the experience from its double-overtime loss at BYU two weeks ago.

The 17th-ranked Bears (2-1) will play in front of another big and loud crowd at Jack Trice Stadium in Ames, just as they did in Provo, Utah, and they'll face another motivated and hard-hitting opponent.

“People always talk about BYU being such a physical team. Well, since I’ve been here, they say the same thing about Iowa State,” linebacker Brooks Miller said. “So we just have to be more physical.”

No. 19 BYU is by far the toughest team Baylor has played. The defending Big 12 champion Bears outscored their other opponents, Albany and Texas State, by a combined 111-17.

The last three Baylor-Iowa State meetings have been decided by a total of 11 points. Baylor hasn't won in Ames since 2016 and this game sets up as a defensive battle. Iowa State leads the Big 12 in total, rushing and scoring defense. Baylor is third in total and rushing defense.

Iowa State coach Matt Campbell said one of his biggest concerns is Baylor's speed. Both teams are in the top four against the pass.

Miller said he's impressed with the transition the Cyclones have made from Brock Purdy to Hunter Dekkers at quarterback.

Dekkers is throwing for just under 250 yards per game, he's second in the Big 12 with eight touchdown passes, and his completion rate of 74.3% is fifth nationally.

“He’s good at getting the ball out,” Miller said. “It’s always different seeing a lefty. He looks real good, he looks smooth.”

Baylor has not seen any drop-off in its ground game since Taye McWilliams went out with a head injury against BYU. Freshman Richard Reese stepped in and ran for 156 yards and three touchdowns against Texas State last week.

“I think there’s such an eagerness and such a heartfelt want to get better that’s kind of driving him," Aranda said, “and we’re way appreciative of that.”

Xavier Hutchinson, who set an Iowa Sate record with 83 receptions last season, already has 28. He's had no fewer than eight catches in any of the first three games.

Anthony Johnson was one of the best cornerbacks in the Big 12 for four years before Campbell asked him to move inside for the Cyclones for his final season. So far, so good.

Johnson is the team's active leader in career pass breakups (25), but he didn't have his first interception until last week against Ohio.

“I think I’m around the ball more,” said Johnson, who will be making his 45th consecutive start. “I’m thankful and I love the transition and I’m glad that I made it.”

Baylor's Dillon Doyle will be back in his home state after transferring from Iowa after the 2019 season. The Iowa City native has started 25 of his 26 games at linebacker for the Bears and made 155 tackles. He also plays some fullback and has a receiving and rushing touchdown.

Iowa State is first in the Big 12 and ninth nationally with eight takeaways (four interceptions, four fumble recoveries). Baylor has two fumble recoveries and no interceptions through three games. The Bears had at least one takeaway in 23 straight games before coming up empty against BYU.