No. 17 Kentucky blows out archrival Louisville 56-10 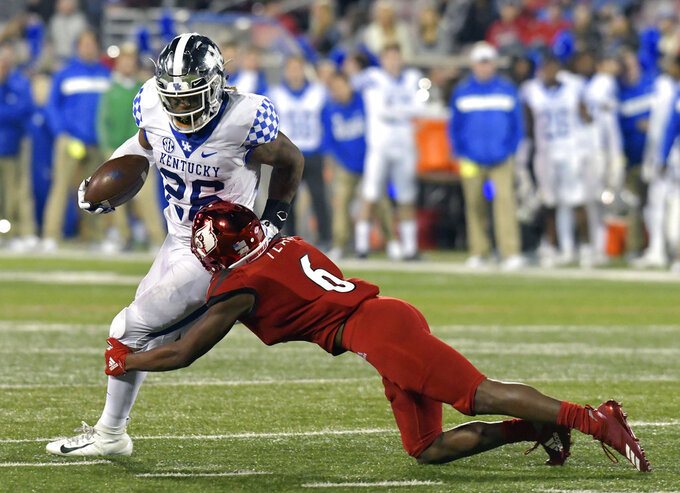 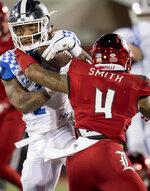 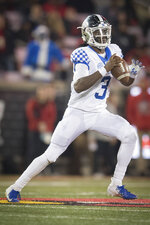 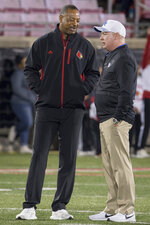 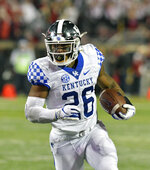 LOUISVILLE, Ky. (AP) — With room to run and time to throw against Louisville, Kentucky quarterback Terry Wilson had it easy living up to his nickname as "Terry Touchdown."

The No. 17 Wildcats found a similarly smooth path toward earning Bluegrass bragging rights.

The Wildcats (9-3) scored TDs on all five first-half drives and never trailed in posting their first nine-win regular season since 1977. After relying most of this season on a fierce defense to create opportunities, their offense finally did all the heavy lifting in posting season highs in points and yardage in outgaining Louisville 601-305.

"Getting nine (wins) is a big deal. Hasn't been done in 41 years and that is significant. I'm proud of that team. They deserve some recognition."

Wilson certainly earned his share of the spotlight by doing much of his damage by halftime.

His 3-yard scoring run provided a 14-0 lead before he tossed TD passes of 28 and 13 yards to Lynn Bowden for a 35-10 cushion late in the second quarter. The sophomore transfer threw a 32-yard TD to Josh Ali in the third to make it 42-10.

"It was huge for us," said Wilson, who was named the game's Most Valuable Player. "It was a mindset for us that we need to go out there and show everybody how explosive we are as an offense. We just came out humming, ready to go. Ready to make plays. I thought it was contagious."

For Louisville, the game was the latest in a series of routs.

Malik Cunningham's 75-yard TD run brought Louisville to 14-7, but the Cardinals lost their ninth in a row and allowed 50 points for the seventh time this season. They failed to beat a Power Five conference school.

"This is not the way we wanted to send 11 seniors out," interim coach Lorenzo Ward said. "You would like for them to leave with something positive. ... I told them to remember the feeling of losing (nine) games in a row."

Ward added that he "never had the thought" of staying on as permanent coach at Louisville.

As Kentucky awaits the announcement of its bowl destination and opponent on Dec. 2, Snell sounded eager to play despite questions about whether he'd sit it out to save himself for the NFL combine and draft. Of course, the junior and 3,000-yard career rusher hasn't announced whether he'll skip his senior year and turn pro. In the meantime, there's work to do.

Snell was ejected in the second quarter of last season's 24-23 Music City Bowl loss to Northwestern for bumping an official.

Cornerback P.J. Mbanasor was ejected in the second quarter for targeting for a hit on a sliding Wilson on a 3-yard run.

Kentucky will remain in the Top 25 as it prepares for a third consecutive bowl game.

Kentucky: Entering the game as heavy favorites, the Wildcats posted their most decisive victory this season. Even when things stalled with consecutive interceptions in the third quarter Wilson recovered to throw his third TD and spur another run of 21 unanswered points. They lead the series 16-15 and won for the second time in three years.

Louisville: The Cardinals played catch-up throughout, and 12 penalties for 134 yards showed a lack of composure. Cunningham was nailed for taunting on his TD and tight end Micky Crum was penalized for unsportsmanlike conduct in the third quarter. Coaches appeared to be pointing Crum toward leaving the field, but Ward said the player was being held out of the game for drawing the 15-yard penalty. He later returned.

Louisville will begin searching for a replacement for coach Bobby Petrino, who was fired on Nov. 11 after a 2-8 start and succeeded by Ward on an interim basis.