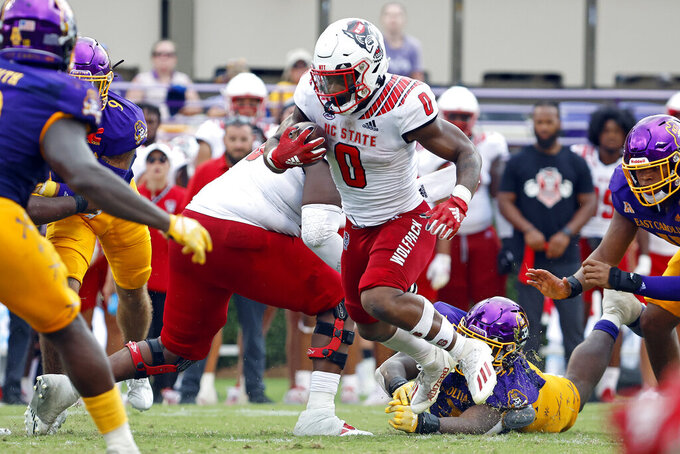 North Carolina State's Demie Sumo-Karngbaye (0) runs the ball against East Carolina during the second half of an NCAA college football game in Greenville, N.C., Saturday, Sept. 3, 2022. (AP Photo/Karl B DeBlaker)

N.C. State would love a better showing than its season-opening win at East Carolina, where the Wolfpack needed the Pirates to miss a field goal in the final seconds to avoid an upset. Getting back home to play a Football Championship Subdivision opponent should help Dave Doeren's club correct some of last weekend's problems, particularly against a Big South program that surrendered 52 points in last weekend's home loss to Western Carolina.

N.C. State's ground game against Charleston Southern's defense. The Wolfpack got some promising signs from an overhauled running game against ECU, namely from Demie Sumo-Karngbaye. The second-year back ran for 79 yards and a touchdown, providing a physical and thumping presence on the ground. The Buccaneers, meanwhile, surrendered 183 yards on the ground and 616 total yards against Western Carolina.

Charleston Southern: QB Ross Malmgren. He threw for 392 yards and five touchdowns in the opener. That made him only the second player in program history to throw at least five TD passes in a game.

N.C. State: WR Thayer Thomas. He had team highs with four catches and 58 yards to go with a TD grab from Devin Leary.

N.C. State fell five spots in this week's AP Top 25 poll after the narrow win against East Carolina. ... N.C. State is 9-0 under Doeren against FCS opponents. The Wolfpack's margin in those games has been 323-96 with three shutouts. ... N.C. State has won 10 straight home games. ... Charleston Southern is 0-25 against Bowl Subdivision opponents and 0-15 against teams from the Power Five conferences. ... The Buccaneers were tied for third in the Big South preseason poll.