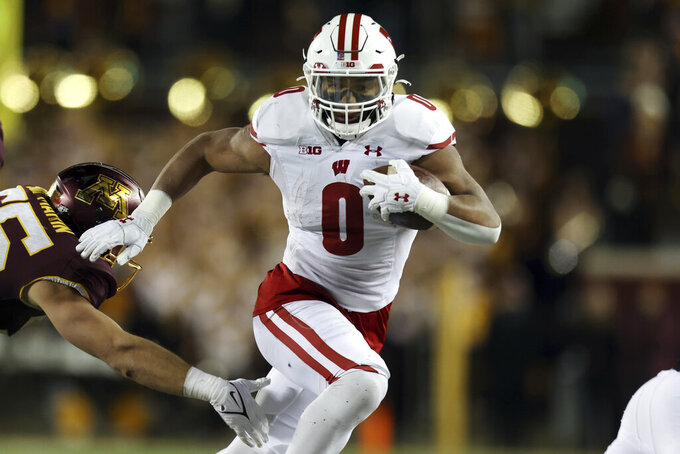 FILE - Wisconsin running back Braelon Allen (0) carries the ball during the second half of an NCAA college football game against Minnesota, Saturday, Nov. 27, 2021, in Minneapolis. Braelon Allen believes he can team up with Chez Mellusi and Isaac Guerendo to give the Badgers’ their best running-back trio in the program’s history. (AP Photo/Stacy Bengs, File)

Wisconsin is trying to start on a better note after dropping three of its first four games last season, including a 16-10 home loss to Penn State in its opener. Illinois State is attempting to have a two-game winning streak over Big Ten opponents after winning 9-7 at Northwestern in 2016. The Redbirds have lost all eight of their other matchups with Big Ten teams.

Wisconsin: LB Nick Herbig is another preseason AP All-America second-team selection. He collected 14 ½ tackles for loss and nine sacks last season while helping Wisconsin allow the fewest yards per game or yards per play of any Football Bowl Subdivision team.

This game marks the debut of Wisconsin offensive coordinator Bobby Engram, the former Baltimore Ravens tight ends coach and the father of Badgers receiver Dean Engram. … Herbig, Keeanu Benton and defensive end Isaiah Mullens are the only Wisconsin players back on defense who started the majority of the Badgers’ games last season. … Wisconsin went 9-4 and beat Arizona State in the Las Vegas Bowl last season. Illinois State went 4-7. … Illinois State has three wins over FBS teams under Brock Spack, who is entering his 14th season as the Redbirds’ coach. Illinois State beat Eastern Michigan in 2012 and Colorado State in 2018 as well as producing that 2016 upset of Northwestern.