No. 19 Michigan hosts Rutgers in Big Ten opener of unbeatens 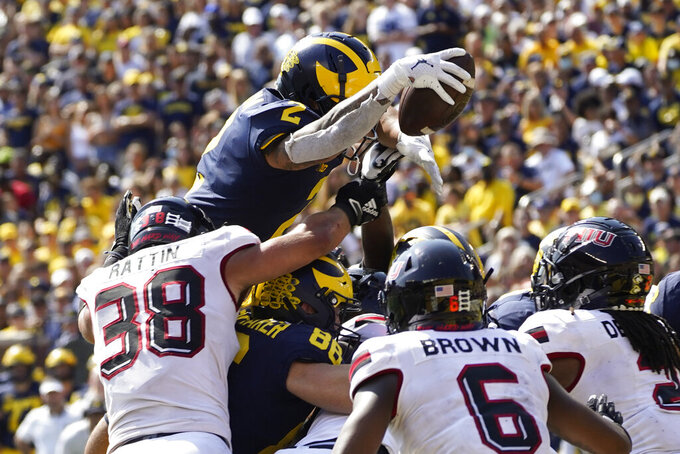 Michigan running back Blake Corum (2) dives for a one-yard touchdown run against Northern Illinois in the second half of a NCAA college football game in Ann Arbor, Mich., Saturday, Sept. 18, 2021. (AP Photo/Paul Sancya)

Line: Michigan by 21, according to FanDuel Sportsbook.

The Wolverines have not won a Big Ten title in 17 years, their longest drought, and can't afford to open conference play with a setback. The Scarlet Knights have a chance to end a drought of their own. They have not beaten a ranked team since knocking off No. 23 South Florida in 2009.

Michigan leads the nation in rushing and among Big Ten teams, Rutgers ranks in the middle of the pack against the run. If the Wolverines can keep opening holes for Blake Corum and Hassan Haskins, the Scarlet Knights will not have much of a chance to pull off an upset.

Rutgers RB Isaih Pacheco had 142 yards rushing, including an 80-yard touchdown, against Michigan in 2018. This season, he has 165 yards rushing and three touchdowns.

Rutgers is 3-0 for the first time since 2012. ... Corum is Michigan's first RB to have three straight 100-yard rushing games since Mike Hart, an assistant coach with the team, had seven in a row in 2007. ... Rutgers outscored Temple, Syracuse and Delaware by 89 points combined, its highest margin of victory through three games since 2007. ... Corum ranks third in the nation with 135.7 yards rushing a game and teammate Hassan Haskins is No. 33 in the country with 93.7 yards rushing per game. ... The Scarlet Knights have not given up a point in the first of fourth quarter this year. ... Michigan has run for more yards in three games this season than it did during its 2-4 season last year. ... Rutgers has a plus-eight turnover margin, ranking second in the country. ... Michigan's offensive line has allowed only one sack and four other tackles for losses. ... The Scarlet Knights beat Michigan in 2014 for their first Big Ten win as a member of the conference. ... Michigan has given up 34 points, ranking ninth in the nation.