No. 19 Michigan prepares for tough test against No. 14 Iowa 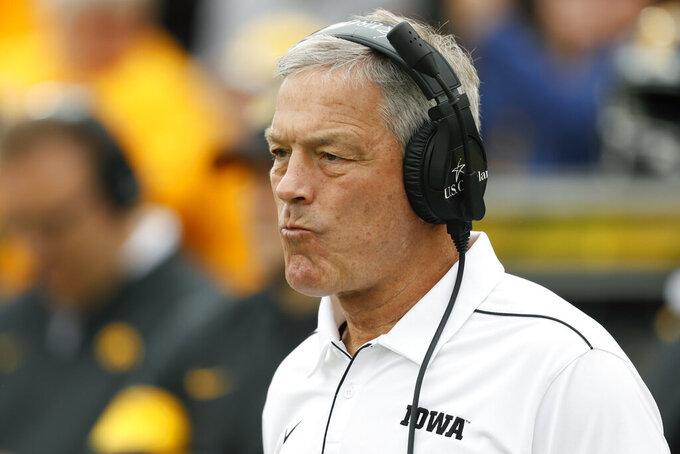 ANN ARBOR, Mich. (AP) — Jim Harbaugh and the Michigan Wolverines have a chance to change the conversation.

The Wolverines were humiliated at Wisconsin, giving up five touchdowns before scoring late in the lopsided game. Michigan bounced back with a feel-good win over Rutgers, but beating a team struggling so much it fired its coach isn't going to make anyone forget what happened against the Badgers.

If Harbaugh can help the 19th-ranked Wolverines beat No. 14 Iowa on Saturday at home, however, it would be a sign that perhaps all is not lost for them this season.

"It's just another test to show who we are," running back Tru Wilson said Monday. "They're all must-wins at this point."

To reach the team's lofty goals, and at least some preseason predictions, that is probably true.

Michigan (3-1, 1-1 Big Ten) started the season with what seemed like a legitimate shot to win a conference championship for the first time since 2004 to end the longest drought in school history. Some projected Harbaugh's fifth team with the Wolverines to be contenders for their first national title since 1997.

Getting routed at Wisconsin changed what people were saying outside the program.

Inside Schembechler Hall, coaches and players say their goals have not changed.

The Wolverines got a boost of confidence by beating the Scarlet Knights 52-0, but Harbaugh and the players aren't interested in celebrating the victory with tougher tasks ahead.

"If you can play two really good games in a row that would be a trend in my mind," Harbaugh said. "Three or more will become a habit so we're trying to cement that as a goal for us. That's where we want to be, consistently good."

Consistently good is how Harbaugh described the Kirk Ferentz-led Hawkeyes (4-0, 1-0) while preparing to face them at the Big House.

Iowa has opened with four wins for the third time in 11 seasons, and history shows the team might be in line for a big season.

The last time the Hawkeyes opened 4-0 was in 2015, when they finished the regular season 12-0 before a last-second loss to Michigan State in the Big Ten title game.

A decade ago, Iowa started 4-0 on its way to an 11-2 finish and an Orange Bowl win over Georgia Tech. The Hawkeyes might have won the Big Ten that year if standout quarterback Ricky Stanzi hadn't hurt his ankle in a home loss to Northwestern the week before a showdown at Ohio State. The Buckeyes beat Iowa and backup quarterback James Vandenberg 27-24 in overtime to seal a berth in the Rose Bowl.

And this year, the Hawkeyes have Michigan's attention with NFL-caliber players on both sides of the ball.

"It's definitely going to be a test," defensive back Tyler Cochran said. "This is our opportunity to show we're better than what happened at Wisconsin and we're going to keep trying to show that the rest of the season."

The road doesn't get much easier for the Wolverines with games remaining at No. 12 Penn State, against No. 9 Notre Dame and No. 25 Michigan State before closing the regular season against rival and No. 4 Ohio State at home.

"Our schedule is all pretty much Top 25 teams for the remainder of the year," defensive tackle Carlo Kemp said. "We're going to have opportunities to play a lot of good football teams."