No. 19 Syracuse gets major kick out of Andre Szmyt 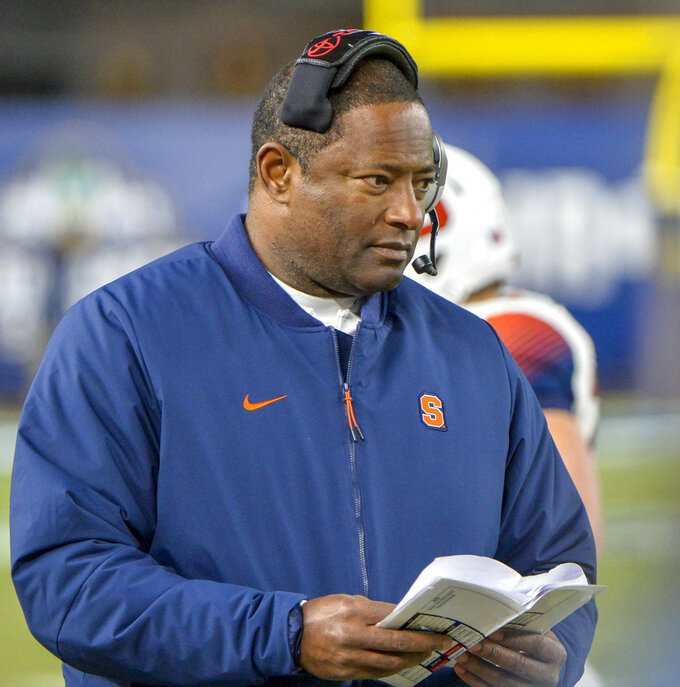 SYRACUSE, N.Y. (AP) — Four years ago, Syracuse place-kicker Andre Szmyt was playing soccer at his high school in the northern Chicago suburbs, not even on the radar of the school's football coach. Now, he's a star for the 19th-ranked Orange.

The 6-1, 195-pound redshirt freshman from Vernon Hills High School is one of three finalists for the Lou Groza Award, given to the nation's top place-kicker. With one game left in the regular season, at Boston College on Saturday, and a bowl game to follow, Szmyt is poised to eclipse the NCAA record for field goals in a season and become just the second kicker to lead the nation in scoring.

Not bad for a walk-on who played only one year of high school football and landed at Syracuse by chance.

"I've been confident all year," Szmyt said. "I knew coming into this season once I was listed as the No. 1 on the depth chart that I could continue. Gaining confidence was a big part."

Szmyt has an Atlantic Coast Conference-record 28 field goals in 31 attempts, including all three he's tried from beyond 50 yards, and has not missed an extra point in 51 tries. He leads the nation with 2.2 field goals and 12.3 points per game for 135 points, also tops in the Bowl Subdivision. The national record for field goals is 31, set in 2003 by Georgia's Billy Bennett. Boise State's Tyler Jones averaged 11.8 points per game in 2004 to lead the nation in scoring.

Those who know Szmyt best are taking it all in stride.

Szmyt landed on his high school football team by chance, too.

"After my junior season of soccer, all my buddies played football," Szmyt said. "They knew I had a strong leg in soccer and they just kind of told me: 'You should be a kicker. We need a kicker on our football team.'"

The coach was an easy sell.

"Our guys sent me a video of him kicking a 55-yarder," Bellecomo recalled. "They said, 'We've got to get this kid out for football.'"

And why not? Nothing like being able to sit back and watch.

"We tried to just leave him alone and let him do his thing," Bellecomo said. "I'm going to be honest. I have no idea about anything about kicking. All of us coaches, we'd looked at each other and every once in a while somebody would ask, 'Where did you get this kicker?' We coached him up. No, not really.

"I thought with some good coaching that he would be fantastic. We just couldn't give it to him."

There wasn't much need.

"He's got the right mentality for a kicker because nothing bothers him. That's just the kind of kid he is," Bellecomo said.

Szmyt's first kick for Vernon Hills was a 43-yarder to win the game.

"There was no time left," Bellecomo said. "It was a 7-7 game and all the kids were yelling at him, 'You're going to make this!' I pulled him aside and I said: 'I'm going to put my headset away because I know this game's over. Now, you go do your thing. I'm not even going to watch.'

"He had a big smile on his face and he nailed it right down the middle. Had about another 10 yards to it. That was my claim to fame as far as coaching him."

Because Szmyt got such a late start in football, there was a scramble to get him noticed, even after a season in which he hit 9 of 12 field goals, including a school-record 48-yarder, to help the Cougars to an 11-4 record.

"It's difficult to sell a kid who only has one year of film and I was trying to sell him to anyone who would listen," Bellecomo said.

One who did listen was Dave Boller, former director of high school relations at Louisville. But the Cardinals wanted him there the day after his classes ended his senior year. "He wasn't big on taking off right away," Bellecomo said.

When Boller abruptly left Louisville to become the Orange's director of player personnel, Szmyt visited Syracuse and decided it was the place for him. He joined the Orange at the start of 2017 fall camp and won the starting job in preseason camp last summer.

"We keep numbers on all our kickers, it's a mathematical thing, and his numbers were extremely high," Syracuse coach Dino Babers said.

Pressure was added in practice to see if Szmyt could still kick with the same high percentage, which he did, and not much seems to have fazed Szmyt since. He hit a pair of field goals in the opener at Western Michigan, a month later converted three in front of a screaming crowd at Death Valley in a near-upset of No. 2 Clemson, then drilled three more in an overtime loss in the rain at Pittsburgh, including a season-long 54-yarder.

His reward after that was a scholarship.

"I was in awe. I wasn't expecting it," Szmyt said. "It came out of nowhere. I was sitting in a team meeting after a loss."

Syracuse is coming off a 36-3 loss to No. 3 Notre Dame at Yankee Stadium. The Orange averted a shutout when Szmyt kicked a 28-yarder with 10 seconds left after clanging a 23-yard attempt off the left upright earlier in the quarter.

"I just pulled the ball," said Szmyt, whose kicks have traveled right down the middle with uncanny regularity.

Syracuse will play in its first bowl game in five years and the Orange are averaging 40.6 points, so Szmyt has a good shot to snare the national record.

"Hopefully, that's the plan if I'm out there," he said.

By The Associated Press 5 hrs ago
By Ralph D. Russo 6 hrs ago
7 hrs ago
By Dave Skretta 8 hrs ago
By Caroline Pineda 9 hrs ago