No. 2 Georgia prepares to face gauntlet of Top 25 teams 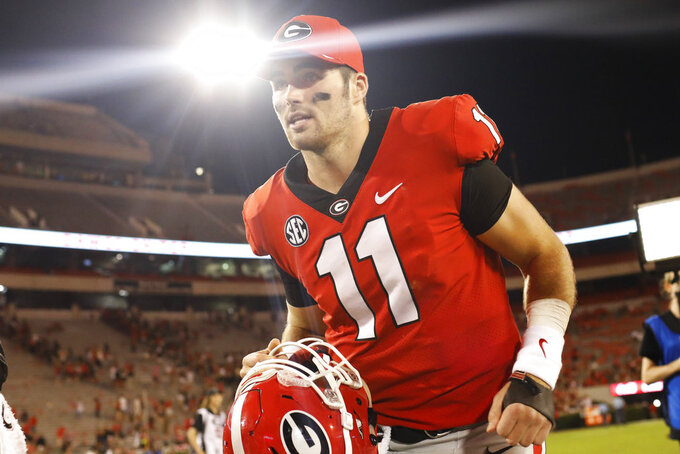 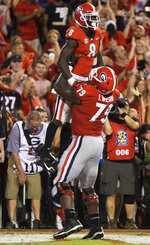 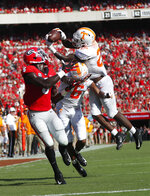 ATLANTA (AP) — The first half of the season was a breeze for No. 2 Georgia.

No daunting opponents. No game closer than two touchdowns.

The Bulldogs must run a gauntlet of four straight games against Southeastern Conference opponents currently ranked in the Top 25, beginning with Saturday's trip to No. 13 LSU.

"Anytime you go on the road in the SEC, it's an adventure," coach Kirby Smart said. "We're going to play some good teams coming up, absolutely. It's tough everywhere in the SEC. Go talk to Tennessee and ask them the road they're dealing with. Go talk to LSU — they just played Florida . I mean, there's no time to cry about it. Nobody wants to hear that. You gotta get ready to go play."

Coming off a trip to the national championship game, Georgia (6-0, 4-0 SEC) has yet to be seriously challenged .

But beating teams like Austin Peay and Vanderbilt by an average of nearly 30 points a game makes this a rather mysterious team. Even this deep into the season, no one is quite sure how the Bulldogs will react when inevitably faced with an opponent that can match up with them physically and hang around well into the second half.

"We just know that from this point going forward we need to be on our A game, because this is our meat of our schedule," receiver Terry Godwin said. "We haven't played our best yet."

Making this stretch even more challenging: only one game is between the hedges.

If the Bulldogs get through all that unscathed, they'll almost surely head to the SEC championship game with a perfect 12-0 record. The final two games are both at home against lowly Massachusetts and state rival Georgia Tech.

"Every week, the team gets better, they get more experience," tight end Isaac Nauta said. "Obviously, we've got a tough stretch up ahead with a lot of good opponents, but our preparation's not going to change. If anything, we're going to push harder because we know the competition's going to get better. It's exciting knowing you're going to go into some of these big games and that's what you want to be a part of being a football player."

Missouri was the only team to remotely challenge Georgia, hanging within striking distance going to the fourth quarter before losing 43-29. In every other game, the final margin was at least 24 points.

That's made it even more important for the Bulldogs to challenge themselves during the week.

"We've been tested," Nauta said. "We believe that some of the best competition we're going to play is in practice."

This will be Georgia's first trip to Baton Rouge since 2008. While no one on the roster has played in Death Valley, they all have a sense of what they'll be up against in Tiger Stadium's notoriously raucous atmosphere.

"From everything I've heard, it's supposed to be an electric place to play in and they've really got the home-field advantage," Nauta said. "I'm ready to see what it's like."

Smart already knows. He played there in 1998 during his senior season at Georgia, spent the 2004 season as an LSU assistant, and returned four more times while serving as Alabama's defensive coordinator.

In some ways, it feels like a season opener for the Bulldogs.

The beginning of the real season, for sure.

"That's why you come to the SEC," Smart said. "You want to run the gauntlet of challenging teams, unbelievable atmospheres on the road. That's what SEC football is all about."

4 minutes ago
By Teresa M. Walker an hour ago
By Mitch Stacy 2 hrs ago
3 hrs ago
By The Associated Press 21 hrs ago