No. 20 Fresno State aiming to avoid letdown against UNLV 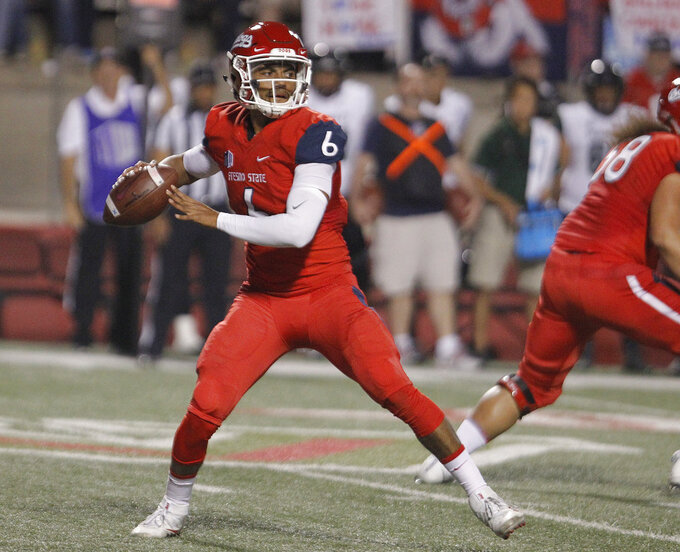 Fresno State quarterback Marcus McMaryion drops back to pass against Hawaii during the first half of an NCAA college football game in Fresno, Calif., Saturday, Oct. 27, 2018. (AP Photo/Gary Kazanjian)

No. 20 Fresno State has a showdown with Boise State next weekend and San Diego State after that in the two biggest games left on the schedule.

First, Fresno State has to get through UNLV. The Rebels are struggling and have yet to win a conference game, but it's not a game the Bulldogs can overlook.

Not after what happened last year: UNLV 26, Fresno State 16.

The loss was Fresno State's only blemish in Mountain West play last year and the Bulldogs haven't won in Las Vegas since 1996.

"I don't think you have to think too far back to understand that they came in here and beat us last year," Fresno State coach Jeff Tedford said. "It was our only loss in conference play last year. They're very capable of doing that. If we don't play our best, that could happen."

On paper, the game is a massive mismatch.

The Bulldogs (7-1, 4-0) head into Las Vegas as more than two-touchdown favorites after climbing into the AP Top 25 and reaching No. 23 in the initial College Football Playoff rankings. They have held 19 straight teams under 30 points — longest such streak in the nation — are fourth nationally in turnover margin and have one of the nation's most accurate quarterbacks in Marcus McMaryion. Fresno State also has won six straight games and is winning by an average of about 25 points per game in conference.

UNLV (2-6, 0-4) has lost five straight by more than 18 points per game, has one of the nation's worst defenses and a quarterback coming back from a foot injury.

"In college football, in any single week, you have to bring your 'A' game or you're not going to be successful," Tedford said. "So it's really about that."

A few more things to look for when No. 20 Fresno State plays at UNLV on Saturday:

ROGERS RETURNS? UNLV may have starting quarterback Armani Rogers back for Saturday's game. The sophomore has missed the past four games with a foot injury, but returned to practice this week. Rogers ran for 488 yards and six touchdowns, and threw for six more scores in four games before he was injured. Max Gilliam started the four games Rogers was out, and has thrown for 1,021 yards and 12 touchdowns with six interceptions this season. He's expected to start again Saturday.

"We're not going to rush him," UNLV coach Tony Sanchez said. "We're going to make sure everything is good and stable."

DOMINATING D: Fresno State's rise into the AP Top 25 for the first time since 2013 has come with a big boost from its smothering defense. The Bulldogs allow 13.5 points per game, tied for fourth nationally with Mississippi State, and are plus-1.75 in turnover margin. Fresno State is 15th nationally allowing 307.6 yards per game, and defensive back Anthoula Kelly leads the nation in passes defended with 15, including a team-leading three interceptions.

MIGHTY MCMARYION: Fresno State quarterback Marcus McMaryion enters Saturday's game as the nation's most accurate passer at 70.4 percent. He's thrown for 2,142 yards and 18 touchdowns with two interceptions, putting up a quarterback rating of 167.2. McMaryion will be a handful for a Rebels defense that's 96th nationally against the pass.