No. 21 Navy seeks to run over Kansas State in Liberty Bowl 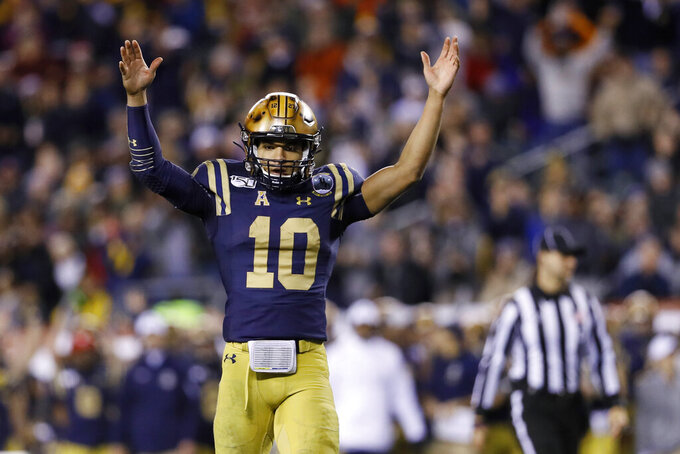 Navy's Malcolm Perry celebrates after a touchdown during the second half of an NCAA college football game against Army, Saturday, Dec. 14, 2019, in Philadelphia. (AP Photo/Matt Slocum)

Navy is seeking to finish the season in the Associated Press Top 25 for just the third time in the last 56 years, matching the accomplishment of the 2004 and 2015 squads. Navy also is chasing an 11th win that would tie the school single-season record (Navy went 11-2 in 2015). Kansas State is aiming for its first nine-win season since 2016.

Navy running game vs. Kansas State run defense: Navy is averaging 363.7 yards rushing per game - 65 more than any other Football Bowl Subdivision team. Navy also is gaining 6.07 yards per carry to rank fourth of any FBS program. That rushing attack will provide a major challenge for a Kansas State defense that allows 4.91 yards per carry to tie for 106th place out of 130 FBS teams.

Kansas State: QB Skylar Thornton: Perry isn’t the only mobile quarterback in this game. Thornton has thrown for 2,191 yards and 12 touchdowns with five interceptions, and he also has rushed for 402 yards and 10 touchdowns.

This marks the first time Kansas State’s Chris Klieman has coached in a bowl game, as he has spent nearly all his career at Football Championship Subdivision programs. Klieman led North Dakota State to four FCS titles in five seasons as a head coach there. ... Both teams are making their second Liberty Bowl appearance. Navy lost 31-28 to Ohio State in 1981 and Kansas State fell 45-23 to Arkansas in 2016. ... Both teams bounced back from losing seasons last year. Navy went 3-10 and Kansas State was 5-7 a year ago. ... In his last game, Perry rushed for 304 yards as Navy trounced Army 31-7. His 304 yards represented the highest individual rushing total in the history of the Army-Navy game. ... Kansas State was the only team to beat one of the four College Football Playoff participants during the regular season. The Wildcats defeated Oklahoma 48-41 on Oct. 26.